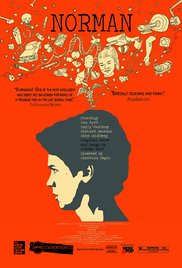 Similar to 2011’s excellent “The Lie” [My Review], this explores how the pressures of life can sometimes force good people to make poor choices and, ultimately, how they deal with the consequences. Here, snarky, unpopular high-schooler Norman (Dan Byrd [IMDB]), has recently dealt with the death of his mother and is now watching his father (Richard Jenkins [IMDB]) succumb painfully to stomach cancer. When berated by a schoolmate about his recent flakiness, he blurts out that he has cancer.

Before he can correct things, the news spreads. In some cases Norman shamelessly plays it up: it provides a comeuppance for some of the more annoying people in his life. In other cases, he regrets it, as when his favorite teacher (Adam Goldberg [IMDB]) confronts him.

The news also spreads to the new girl, Emily (Emily VanCamp [IMDB]), with whom he had been inexplicably, but successfully, flirting. Now the question is, as their relationship grows, is spending time with him because of him or because of the cancer? More importantly, what will happen when the truth, inevitably, comes out?

Unable to truly face the situation at home or the gravity of his lie, he vacillates between attempting to fix the former, embracing the latter and trying to to ignore both. The performances are wonderfully apt and layered. Bryd conveys the pain and confusion of Norman’s life eloquently, with a deep, honest charm. Jenkins, as always, embodies the realities of his character with a stunning sincerity. VanCamp provides an inexhaustibly positive counterpoint that could have easily become trite in less capable hands.

As the story builds, Norman is forced to mature and reevaluate the snap decisions he’s so often made. Life forces him to prioritize. He rises to accept the consequences of both the losses forced upon him and the losses that he’s brought upon himself. Heroism isn’t always about great deeds or events; sometimes it’s only about surviving as best as you’re able without giving in to the darkness.