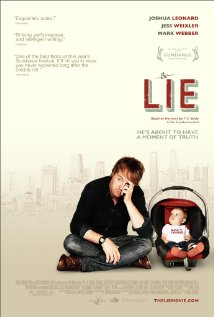 “The Lie” on IMDB

It’s taken me a long time to write this review.  Some movies I have to mull over for a while.  It’s difficult for me, sometimes, to actually know whether I even liked a movie or not right after seeing it.  I have to swish it around in my head and see if anything sticks after a few days.

In this case  can honestly say that I didn’t like the movie… after much consideration I’ve decided that I loved it.

Taken as simply as possible this is a mid-life crisis movie.  Lonnie (Joshua Leonard [IMDB]) and Clover (Jess Weixler [IMDB]; in another excellent role) are latter-day flower children who have recently started a family.  Lonnie is working in a job he hates for people he despises.  Clover is finishing up school and, against her normal convictions, is considering taking a stable, respectable position at a huge pharmaceutical company.  They’ve grown distant from their friends, their ideals and their roots.

Most of the film centers on Lonnie who has what can only be described as a mild nervous breakdown.  He simply can’t face another day at work.  He panics and tells a lie to get out of it.  A big lie.  A lie guaranteed to work.  A lie that can’t be taken back and one that can’t be kept forever.  We follow him for several days as control of his life spirals just out of his reach until finally, in a wonderfully realized scene, he has to fess up and try to explain himself to Clover.

The movie’s not for everyone.  These are the kind of folks that some people (even myself on occasion) would say “just need to get their heads out of the clouds and accept life for what it is.”  For its part the movie really doesn’t weigh in on this.  We see the things that are pulling the characters down and we see how they change in response but we never see if things end up better.  We hope it does but the movie simply celebrates their decision to take the chance.