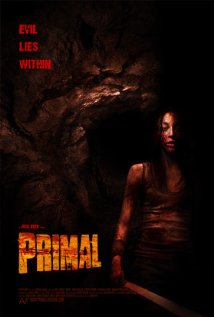 Not bad for the genre really, but if you’re looking for any explanation at all you’re not going to get it.  I’ve been fairly impressed with the quality of B movies coming out of Australia recently – this is on par with any of the American B-level theatrical releases recently (movies like “The Descent” or “The Hills have Eyes” come to mind).

In a pretty standard set-up a group of generically attractive friends head into the unknown – in this case to find aboriginal cave-paintings rumored of in a late 1800’s diary.  They find the site near a spooky tunnel and set up camp.  After some strange happenings one of their number becomes sick and then psychotic.  Things go South from there obviously.

I liked the way the story progressed and the friend-as-protagonist driver.  Many of the characters aren’t particularly likeable which did get a little grinding but they’re also, for the most part, consistent which was refreshing (too often characters are used to do exactly what the script requires regardless of their presented inclinations).

Several threads are introduced but unfortunately not handled well.  We see settlers from the 1880’s in a few scenes, but they seem tacked on.  A life-changing event for the main character is blithely introduced but never expanded on.  Relationship issues with other characters are touched on but never resolved.  Finally, and most importantly, no background is ever really given on the primary antagonist and you’re left feeling a bit like the movie was left unfinished.

Although I was worried by the gratuitous, clichéd heavy-metal in the opening credits the audio work was surprisingly good overall.  The outback settings were impressive, but as nearly all of the movie takes place in the dark they were completely underused.  The effects were above average overall with the make-up effects being particularly effective.

If you’re looking for an explanation you’ll be disappointed.  There’s none to be had.  At all.  But as a popcorn horror movie this actually, surprisingly, succeeds more than it fails.  It’s not smart or deep but it is fun and pretty and sometimes that’s all you need.