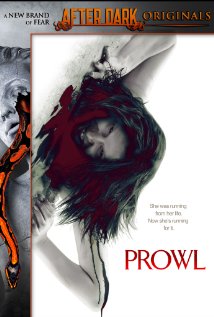 I did like this, although it was pretty grotesquely stretched and still only hit 80 minutes.  It would have worked much better as a short-form film or within an anthology.

Until about two-thirds in the movie is pretty paint-by-numbers: a group of friends have car trouble and are picked up by a seemingly helpful trucker who kidnaps them and leaves them in an abandoned warehouse full of killer psychotics.  The reveal is far from unpredictable but competent and sensical (there’s little I hate more than a “twist” ending requiring a herculean suspension of disbelief).

The movie can be tossed blindly into the “group of attractive teenagers attacked by monsters” category but I think that may be a bit too hasty (although not hard to defend).  The script is weak with little character growth and most of the dialog is ham-fistedly expositionary.  The lead actress is likable enough but not given any depth to work with (besides the obligatory screaming) and nobody else really stands out at all.

The audio work is a huge weak point.  Bad levels mean you’re unable to hear some conversations while other scenes are much to loud for comfort.  The music is generic and uninspired even for the budget level we’re talking here (which is rock bottom).  The effects work well enough but all are straight off-the-shelf with no real stand-outs.  To be fair they seemed to know their limitations and none of the effects were bad enough to call out specifically either.

If you like schlocky horror you’ll probably like this well enough to give it a meaningless rental.  I’m willing to give significant credit to an attempt (even a failed one) at adding something new to a genre. While this doesn’t wholly succeed the attempt is honest and not without high-points.