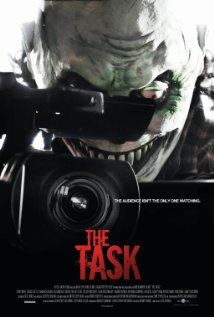 “The Task” on IMDB

[This is the fifth review for this edition of  my semi-regular “my-wife-and-kids-are-visiting-relatives-so-I’m-watching-loads-of-crappy-movies” film festival.]

Credit where credit is due, this movie really did try.  The premise – a reality show set in a haunted prison – isn’t anything particularly new but I think still has some legs.  The acting was above average for the budget, for the most part, and while there were no real standouts nobody really embarrassed themselves either.  The sets were decent and the effects (what little there were) done well enough.

No, this movie’s biggest issue was that the “monster” was a short, portly, middle-age man with no shirt.  He was bald as well – which I suppose horrifies some people.  Now yes, he was a ghost and there were nasty stories told about him… but still: a little bald guy with a pot-belly isn’t an effective monster.  See that creepy ghoulie thing in the poster?  Doesn’t exist in the movie at all.  Instead you basically get a short, topless Michael Chiklis.

The movie has some pacing problems as well.  It also suffers from the modern hollywood bane: the twist, twist, twist ending (that’s three twists in case you weren’t counting).  Had it ended with the first twist it might have actually been somewhat defensible, but by the third you’re eyes are rolling.  At least one character also just plain disappears early on in the movie with no explanation.