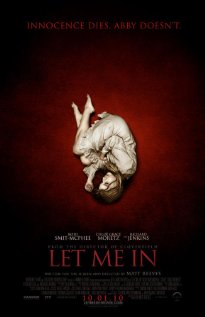 [This is the sixth review for this edition of  my semi-regular “my-wife-and-kids-are-visiting-relatives-so-I’m-watching-loads-of-crappy-movies” film festival.]

“Let Me In” is an American remake of the absolutely excellent Swedish film “Let the Right One In” which is based on the book of the same name.  So, right off the bat they’ve pissed me off by deciding that they’re title is better than the author’s.  They also change the name of the main characters from “Eli” and “Oskar” to “Abby” and “Owen”.  Not off to a good start, movie.

Could the movie win me over?  Surprisingly, yes.

This is not as good as the Swedish adaptation but it’s close.  Even great at times.  This version streamlines things quite a bit.  Håkan’s role, pivotal in the book, was reduced greatly and in fact he doesn’t even earn a name here (credited only as “The Father”).  They also accelerate several aspects of his story.  The “drinking buddies” roles are all but eliminated in this – the few that made it are essentially props.

Lacking those voices this version is completely dependent on the child actors Kodi Smit-McPhee and Chloe Moretz.  Both are completely up to the task.  They provide a surprising depth to their roles despite the almost complete  lack of exposition.  Unwitting innuendo is delivered perfectly and with a maturity well beyond their years and many other actors talents.  When Owen is disappointed with Abby we know it – not because of a staged “sad face” but because you can see it in his eyes.  When Abby attempts to go against her nature to please him we see that multi-layered conflict in her face.  These are not pantomiming moppets, these are skilled actors.

This is a slow, complex story related almost exclusively as empathetic exchanges between two children, one troubled and harassed the other ancient and alone.  It would have been incredibly easy for an American adaptation to simply create “True Twilight Blood for Tweens Diaries”.  Maybe even add a werewolf as a twist ending.  It’s completely to Matt Reeves credit that he maintained the true spirit of the story even if it’s hard to understand why an American version was needed in the first place.