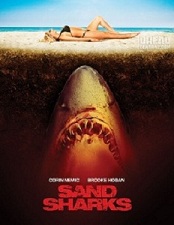 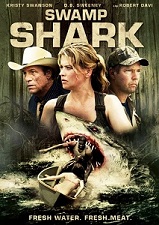 It’s been a while since I’ve treated myself to a nice, relaxing crappy-movie marathon and I decided to, since I’d queued several, set my will against a trio of shark-themed fin-fests.  Will I survive?  Will I turn them off in disgust and return to “Skyrim” (they do need me there, what with all the dragons and unpludered crypts)?

Crappy shark movies have been a staple since “Jaws” [IMDB] showed everybody how to make a good shark movie.  Sometimes the shark is a killer whale, sometimes it’s an alien, sometimes it’s a lot of little fish – but it’s always (basically) a shark.  A merciless super-predator in an alien medium.  The water is different; disconcerting.  Our senses work differently, our muscles work differently and we’re always a last gulp of air away from a choking death.

Water creates a duality: above is light, breath and life and below is darkness, fear and death.  Who can forget the scene in “Aliens” [IMDB] where Newt is left shivering, chest deep in black water?  Or watching Lindsey gasping her life away for lack of a crescent-wrench in “The Abyss” [IMDB]?  These are iconic scenes that tap into our primal terrors.  Water is, in a word, scary.

Mostly because it ignores this the absolute worst of this bunch is “Sand Sharks”.  The sharks in this film “swim through sand” – saving the producers from renting underwater cameras but ignoring the fundamental truth of shark movies.  I was initially happy to see Corin Nemic (who did a great stint as “Jonas” in “Stargate SG1”) but, perhaps egged on by awful direction, he hammed it up just as badly as the rest of the terrible, talentless cast (which included several of Hulk Hogan’s children wringing the absolute most out of their 15 minutes).

Like all CGI crapfests this one suffered – badly – from a lack of consistent scale.  We see a sharks change  from hundreds to dozens to several feet long from scene to scene.  It also loses big points for making so many idiotic references to “Jaws”.  Crappy movies need to know their place.  One good thing: the terribly animated sharks and ridiculous premise did remind me fleetingly of the Saturnian sand worms from “Beetlejuice” – and that was a very good movie.

“Shark Night” is the big budget option here but it’s uninspired at best.  Teenage friends isolate themselves on an island and proceed to be attacked by sharks (and, later, rednecks).  There are some interesting threads woven in but nothing that makes the final product really stand out.  Donal Logue’s performance as the small-town sheriff is worth noting but maybe just in comparison to the weak performances of everybody else.

The few times it was able to build up some collateral with the audience it squandered it with some trite, moronic 3D stunt-shot (like a shark flying over a jet ski).  It’s marketing adherence to a PG-13 rating meant that it couldn’t even save itself with gratuitous nudity or gore.  At least it remembered the cardinal rule of Shark movies and had some underwater scare shots even if it did wander into a “man is the real monster” rut at the end.

I actually really wanted to like “Swamp Shark.  Crappy movies often benefit from the horrible career tragedies of otherwise talented people and this one features Kristy Swanson, D.B. Sweeny and Robert Davi.  The plot is bog-standard (shark in a place that a shark shouldn’t be) and all they needed to be was competent to make par.  But they really hosed it.

Continuity kills this movie dead.  You’ll be constantly wondering why in the hell that happened – whatever “that” was – from start to finish.  People have wild emotional responses to things that never happened.  In one scene we see a guy smash his head and then and in the next scene see a woman with a cut on her forehead.  People wander away from a group, get killed, and are never mentioned again.  A guy riding in his own boat with willing passengers suddenly and for no logical reason suddenly starts acting like a guilty kidnapper.  People who are told by the police to “just leave and there won’t be any trouble” suddenly attack the police so that they can leave.  It’s like they made three or four versions of each scene and just mixed them up “Naked Lunch” style.

So these crappy movies turned out to be (very) crappy movies.  That’s fine.  We wade through the crap because every once in a great while there’s something special (if not special at least watchable).  For every “Evil Dead” or “Clerks” or “Tremors” we have to suffer through hundreds (or thousands) of thrown-together abominations.  So what if these three get tossed into the chum bucket?  There’s always more and that means there’s always hope.