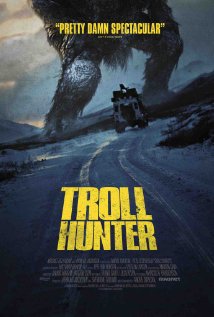 As my hordes of imaginary regular readers know I watch a lot of bad monster movies.  So many, in fact, that when an actual good monster movie sneaks in I sometimes have to consider: is it truly a good movie or have I abused my pallette to the point where even mediocre seems good by comparison?  Can a dog that eats cat-turds truly appreciate filet mignon?

Philosophical discussion aside I have made a decision: “Troll Hunter” is a good movie.  A very good movie.

The film begins with a sincerely worded text-introduction.  This is “found” footage that’s been “authenticated” by… somebody.  If it sounds trite and reminds you immediately of the dozen or so horrible “The Blair Witch Project” [IMDB] clones that have littered the landscape in the past decade then you’re not alone.

You’re also not wrong – the movie rarely turns from formula.  You get the shaky camera footage, the “accidental” glimpses and the required “we didn’t know the camera was on” gags.  What makes the difference is the quality of the experience not the technique used to tell it.

The students begin their particular college film project by attempting to track down a reputed poacher of bears in the Norwegian wilderness.  They find him and, after some initial excitement, discover that he’s a secret, government-funded hunter of trolls.  Huge, destructive and dumb-as-posts trolls are difficult prey that have been, for some reason, moving out of their normally isolated habitats.

The performances are nicely balanced and appropriate.  While it’s clear that none of the principles are veteran actors the format only requires sincerity, not abundant skill, and they have that in spades.  The script does bog down sometimes in its attempts to “scientifically” explain aspects of troll physiology and management (all of which are moronic but inoffensive).  One warning however: watch it subtitled if you can – the dub I tried to watch at first was horrible.

The special effects shine.  They’re incredibly subtle and interlaced into the “amateur” footage brilliantly.  Highlights are the several technically impressive “night-vision” shots and the extended climax across a frozen tundra.  The trolls are very-well designed and will be instantly recognizable to fans of the fairy-tales.  The the attention to detail in their  faces an movement – while only seen in glimpses for the most part – is apparent.

If nothing else you have to admire “Troll Hunter” just because they tried to tap a new well.  With nary a zombie, vampire, werewolf, ghost or alien in sight this remains a supremely entertaining, original film – one of a growing number coming out of Scandinavia recently.  Don’t worry however: confirmation of an American “mass market” remake has already been announced.  I’m sure after going through multiple committees it will feature a vampire/troll/goth-chick love-triangle.