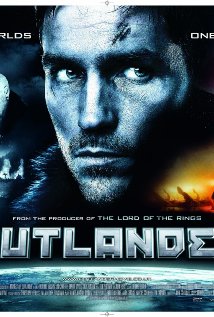 A friend of mine suggested this one and I have no idea how I missed it.  Apparently it was in theaters and everything!  Good actors and a significant budget carry it a long way.  Some interesting ideas carry it further but a few unfortunate missteps keep it from real greatness.

The story revolves around Kainan (Jim Caviezel), a soldier unwittingly transporting the last of the Moorwen, huge luminescent predators responsible for (perhaps justifiably) destroying his colony and family.  When the stowaway attacks and causes his ship to crash onto a backwater planet and sink beneath a lake he finds himself in 8th century Norway with little gear and no allies.  After some misunderstandings and significant bloodshed he convinces the local feuding clans, led by John Hurt and Ron Perlman to work together and hunt the creature.

I’ve recently read the entire run of the excellent, but sadly cancelled, Northlanders and am completely sold on the dramatic potential of the ancient Norsemen.  Where many movies portray them as loud, primitive barbarians this script treats them with a refreshingly sincere respect.  Ron Perlman is always a joy when allowed to let loose and scream and my only complaint is that he didn’t get nearly enough screen time.  The action is broad and expansive and well-choreographed even if Caviezel never really seems to be truly comfortable with it.   There’s also the expected romantic side-plot that proceeds by-the-numbers but is kept from stalling the momentum.

I’ve often lamented the dull sameness of many hollywood creature effects lately and while the Morwen deserves some criticism on this score it’s still nicely effective.  Leathery-skin, skeletal features, drooling fangs are all standard fare but there’s an excellent musculature at work – like a cross between an ape and a panther – that makes for some truly gorgeous animations.  The quality of the movement is highlit by the impressive bio-luminescence effects and a highly dramatic reveal.

There are a few brain-breaking items that will smack you around if you let them.  Humans transplanted to Earth from elsewhere is a peeve of mine.  In the climax we have our heroes climb down the village well and emerge in a cave system rivaling Grand Central Station.  You’ll be forced to wonder why anybody would salvage some random bits of metal instead of, say, a big-ass gun.  The ending hinges on a silly-but-harmless sequence involving a rescue beacon that can’t be explained properly without spoiling it but you’ll know it when you see it.

Regardless this is still exactly the kind of movie that I absolutely love.  Likable characters, bombastic action and lovingly drawn effects all overcome clichéd tropes and questionable circumstances.  It is flawed (maybe even deeply flawed) but if you cork the part of yourself that demand that every aspect of a story make sense you’ll have a hell of a lot of fun.