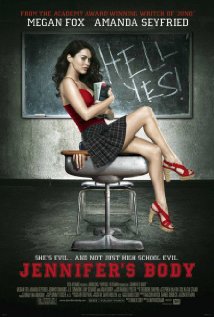 [This is the seventh review for this edition of  my semi-regular “my-wife-is-visiting-relatives-so-I’m-watching-loads-of-crappy-movies” film festival.]

I must admit that I didn’t know much about this going in.  I remember hearing a lot about it when it was released then promptly forgot all about it.  I was absolutely convinced that this was a silly teen vampire movie trading mostly on Megan Fox’s breasts (you know, before she imploded and all).  I was wrong – it’s deeper than that.  Not a whole lot deeper, but still – deeper.  Oh, and no vampires.

I didn’t realize, for example, that this was actually Diablo Cody’s screenwriting follow-up to the excellent “Juno” [IMDB].  While this wasn’t nearly as strong it definately didn’t suck.  The teen slang (which admittedly may have been absolutely on the ball) got thick and annoying real fast but that could just be my peeve.  Megan Fox is a bad actress but she’s also not really the star (even tho’ she’s the only person ever associated with it).  Amanda Seyfried is a good (well, decent) actress which is good since she actually is the star.

As a horror movie this holds up suprisingly well.  It doesn’t rely nearly so heavily on Fox’s sex appeal (or acting) as the promotional materials would have you believe.  The actual mechanics of the possession are a little loose and the eventual exposition kind of silly but at least they didn’t complicate things too much.  Some of the best work is done in the bit parts by often sidelined actors like J.K. Simmons, Amy Sedaris and Cynthia Nixon.

Despite the titillating (and misleading) title and box art there’s actually a good little horror movie here.  Seyfried carries the story well, the script has good pacing and the effects, while a little simplistic, are nicely effective.  It’s just campy enough to be fun but not so campy that it can’t be taken just seriously enough.