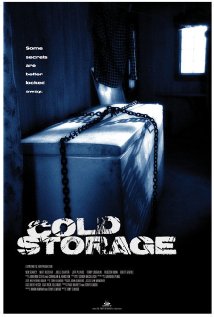 While the description and the title may lead you to instantly think “slasher flick” (I did) there’s actually a deeper story here.  It doesn’t always work (and sometimes it really doesn’t work) but it’s an honest attempt to break the mold and for that alone it deserves some love.

The oddest thing about the movie is the title.  A chest freezer like the one in the poster figures prominently in the film… for about three minutes.  Tops.  Even in those three minutes it’s not really a necessity: a hope chest or closet would have worked just as well – or better, actually, as when it does appear the freezer feels out-of-place.   The title doesn’t ruin the movie, of course, but it is a problem.  It sets up false expectations and remains distracting throughout.  It’s like if “Star Wars” had been named “Detention Center”; it wouldn’t have made the movie any less great but it would have confused a hell of lot of people.

Anyway this is actually a rather soft, creepy movie rather than a blood’n’guts fest.  Nick Searcy (one of the several people in this movie that also have roles in the excellent FX TV series “Justified” [IMDB]) provides a wonderful performance as Clive, a developmentally-challenged hill-billy type.  When Clive comes across the beautiful young victim of a fatal car accident he begins what can only be called a romance while the girl’s sibling and boyfriend search for her.  The movie never really succeeds in building any tension but it excels at handing out the willies.  Clive is innocent and surprisingly forgivable but undeniably creepy as hell.

When all is said and done this actually an above average attempt at a creepy thriller that should give even the most jaded viewer one or two shivers.  It suffers from budget and acting issues, an unimaginative ending and a jarring, unneeded opening flashback sequence.  On the plus side it delivers disturbing subtext in spades.  If you prefer your scares more cerebral than suprising and can forgive its problems then I think you’ll probably like this quite a bit.