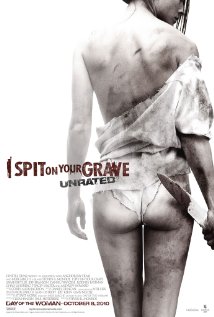 “I Spit on Your Grave” on IMDB

This is not a movie for a first date… or a third for that matter.  Or, in fact, any week were you might want to actually have sex… on second thought make that any month.    This is a remake of the controversial 1978 classic horror movie of the same name [IMDB].  Often mislabeled an exploitation film the original was anything but sexual.  (While I’m sadly sure that some people must enjoy this kind of brutality it was clearly not the intention of the film to cater to that audience.)

This was not as rakingly raw as the original but attitudes have evolved (or least we hope they have) in the past thirty years and this remake delivers the same gut-wrenching belly-punch.  Overall this is an extremely simple  plot of revenge fantasy but for revenge this visceral to be accepted the violation suffered must be extreme.

Jennifer has rented a cabin in the woods to work on her novel.  While there she is brutally gang-raped.  The sheer degeneracy and graphicness of the attack is absolutely shocking and sitting through it takes a strong stomach.  Absolutely no holds are barred and no quarter given either to Jennifer or the audience.  There is no hint of qualification given; absolutely no way for even the most sexist troglodyte to justify the assault.

This ups the ante considerably by presenting a deeply human atrocity that’s not only possible, but a terrifying reality for many women.  This is a deeply disturbing  but also deeply effective movie.  It’s going to very difficult, if not unwatchable, for some people but that speaks to how uncompromising it really is more than anything else.