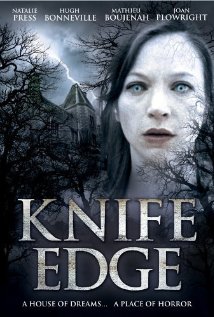 The grunting, slobbering core of this movie is an unwieldy, multi-tentacled plot that drags itself into your living room, sits in your favorite chair and demands, “what kind of snacks you got?”  It sits there eating your food and throwing what it thinks are insanely clever ideas at you for 90 minutes then gets up.  That’s when you notice the smell and the movie’s core, noticing your look of disgust, admits: “By the way, I shit in your chair.”

The core lives in a smelly bog featuring large, steaming piles of stinky acting and creeping, completely vacuous characterizations.  There’s also, bizarrely, a couple of absolutely beautiful edited effects shots.  One is a gorgeous panning shot from a CGI stock ticker to the office of the brokers using it and the other is a wonderful tracking shot following the point-of-view from inside a computer screen as the main character uses Google.  These two sequences are completely competent: effects, camera work, music – the works.  They’re also so out-of-place as to be utterly laughable.

Here’s the plot – which I’m going to spoil all over your face: in a jealous rage a man murders the woman he loves in a giant old house in the English countryside.  The gardener tries to stop him but is killed and ultimately blamed for the crime.  Her son, running from the scene, hides in a toy chest and suffocates to death.  However the gardener’s four-year old son – who for some reason is in the room – was hidden under the bed and survives – but is sent to live with a foster family in France by his mother for some other reason.

27 years later the son, having no memory of the house, is somehow rich enough to buy the house that he can’t remember for no reason.  He meets a girl, who happens to be psychic wizard of wall street, falls in love and three years later moves back to England and surprises her with the enormous mansion that he never mentioned he owned.  He then goes immediately and completely bankrupt, his wife starts having horrifying visions of past/future stuff and their son starts talking with the ghost of the dead boy from thirty years ago.

So the guy gets framed for nasty things by the murderer who has known his wife for decades and loves her.  That is until her psychic powers let her find the murder weapon which causes him to hate her.  So he tells her everything for no reason and tries to kill her.  But she’s saved (sorta) by the mother of the kid that got sent away to France (and who’s been their nanny all along).  Then we see that all the crazy the wife has been stockpiling was all for good reasons even if none of it actually makes any sense.  Then she uses her psychic powers to trick the murderer into getting murdered.

Think “Signs” [IMDB] mashed up with “The Shining” [IMDB] and then watch one of them instead.