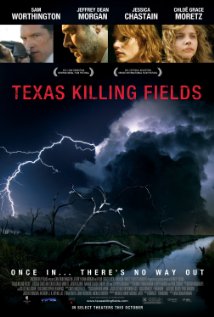 I have to admit I’d never heard of this movie before.  My wife started it before I came into the room and when I saw the title I assumed “B-grade horror”.  Then when I started seeing the cast I thought, “Hey – this is an actual real movie!”  And indeed it was – A-list actors and everything!

The movie suffered badly from pacing and plot construction issues.  There are really two plots intertwined but both are unsolved murders but with such ill-defined boundaries that it’s often unclear which is the current focus.  It often takes the audience several beats to catch on and this is made more difficult by a script that lacks many establishing scenes (a technique that would actually work very well with a simpler story).  There are also some editing issues that distract and often break the mood.

The “Killing Fields” of the title never really rise up to the level of a character in their own right and much of the dread the movie tries to generate falls flat because of this.  There are also some oddly truncated plot threads (like the devout Catholicism of one of the detectives and the broken marriage of the other) that are never allowed to get off the ground.  Finally some of the decisions made are absolute groaners.

On the plus side there’s an excellent cast here (even if they are underused) and even disjointed the stories are still damn interesting.  (Jeffrey Dean Morgan needs to start making the Tom Cruise money, by the way.)  I have a soft spot for southern-fried murder-mysteries and this was still better than any of the procedurals on TV.