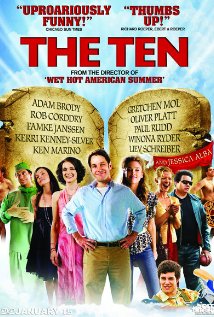 “The Ten” on IMDB

This is a silly collection of loosely related skits based on the Ten Commandments.  Think “Kentucky Fried Movie” [IMDB] or “Amazon Women on the Moon” [IMDB].  It’s mindless and silly and absurd.

The problem is it’s just not very funny.

Which is sad because the amount of talent they collected for this is impressive.  Pretty much everybody in it has moved on to bigger and better things and those that didn’t have moved on to funnier things at least.  There are some high-points, to be sure, but there’s also a whole lotta not-funny to work through.

The problem isn’t actually that the ideas are terribly bad… but they are driven, drawn, and stretched out long after the initial smile.  Even with 10 short stories and a connective narrative squeezed into 90 minutes most of the jokes just long outlast their welcome.

Secondarily the premise is really just wasted.  There’s so very much potential hilarity in the 10 Commandments and instead they go for the most tenuous of links and the most basic of gags.  “Thou shalt not covet”, for example, concerns two neighbors purchasing MRI machines in an attempt to outdo each other.  See – the idea that somebody would buy an MRI to outdo their neighbor is a little funny.  A ten minute sketch based on it… isn’t.