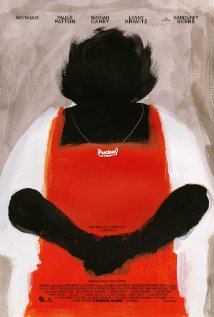 I don’t often review dramas (or really good movies for that matter).  Dramas are tiring and emotionally draining and lack the explosions and bad special effects that have come to be recognized as signs of “Dad’s movies” in my home.  However my wife feels differently.  She loves those weepy, drippy tear-jerkers!  So, with high expectations and she with a box of tissues we sat down to watch this acclaimed drama.

Guess what?  The movie that everybody said was great?  It was pretty damn good!

Gabourey Sidibe [IMDB] plays the title character and deserves every one of the accolades she’s received.  The heart of the movie is a self-awakening.  When we meet Precious she’s habitually silent, almost completely illiterate and exhibits almost no social skills or understanding.  Slowly we learn, assisted by gut-wrenching flashbacks and narration, that, at the age of sixteen, she’s pregnant with her second child.  The child is the result of chronic rape by her mostly absent father.  The tragedy is compounded by abuse from her mother who is upset that her daughter has “stolen her man” from her.

Through the graces of a few good people Precious is prodded to learn to read and find an outlet for her anger and shame in writing.  As she becomes empowered by her education she discovers an ability to talk about her situation and take positive action on it.  Her life continues to throw obstacles in her way but we see that she is clearly better equipped to deal with them as time goes on.  In a penultimate scene her mother, in an attempt to continue receiving welfare benefits after being exposed for fraud, must detail the abuse her daughter received and her reasoning for allowing it to continue.

As you might guess that tissue box had friction burns by this point.  This is a major tear-jerker and a truly draining story to work through.  It’s a deeply personal story as well (not a polemic against welfare or poverty as some have claimed).  It’s also not a fable; there are no easy answers or quick fixes to be found here.  People weaned on Hollywood may not like the stark reality presented.