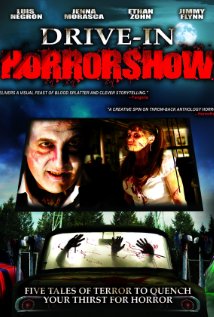 Low budget horror movies can take several directions.  Some attempt a tone of such complete, sincere seriousness that they can do nothing but fail when delivered by terrible actors.  Others veer off to the other extreme where they attempt to downplay their shortcomings with parody or comedy.  These tend to fail even more completely because parody and comedy aren’t remotely the shortcuts these folks think they are.  In fact they’re almost impossible to pull off correctly.

This incredibly low-budget anthology actually does a commendable job of walking the line between these extremes.  The host segments are pure late-night horror-host schlock with all of the puns and silliness that you could want.  Attempting, as they do, to lighten the mood they’re the weakest element of the film (again, comedy is hard – damn hard) but they balance the stories being presented well.

For the most part the stories are dead serious.  The acting is terrible, the effects are terrible, the pacing is terrible but this is all countered by some genuinely intriguing ideas and a clear desire to produce something worthwhile.  There are five stories in total.  While the overall quality varies from “bad” to “damn bad” all of them, with the marked exception of a paint-by-numbers kids-get-killed-in-the-woods piece, have something interesting to say.

This has got all the problems of a genre movie with a budget in the dozens of dollars.  But it does have… something.  Heart, maybe?  Gumption?  Chutzpah?  It never allows itself to stop trying.  It doesn’t get halfway across the field and then pretend to pull its hamstring when it gets tired.  This movie has some guts (and balls and entrails).  No, this movie isn’t good – but you may be very surprised to discovered that it’s really not bad either.