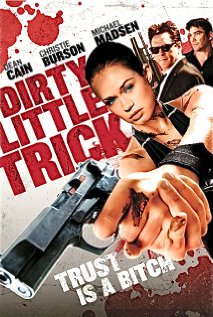 This is a low-budget, ham-fisted thriller that thinks it’s a hell of lot more clever than it really is.  Most of the budget is blown on the marquee talent, Dean Cain [IMDB] and Michael Madsen [IMDB].  Both of their careers have taken undeniable downward turns in recent years and neither puts forth his best effort here.  Madsen, especially, sleepwalks through his scenes.  The rest of the acting is universally terrible.

The bad acting is magnified through soap-opera quality camera work.  Every scene (and I literally mean every scene) is a close up.  This could be because they seem to have had only two locations.  Here, it’s an apartment.  Then we add some boxes and now – movie magic! – it’s a warehouse!  It doesn’t help that the sound work is nearly non-existent – everything exists in a flat, lifeless monotone.

The script is convoluted as hell.  It tries to cleverly play with the timeline but comes off more like scene-soup.  Characters just kind of… do things.  Only the most direct and mindless of motivations are provided and even they fail to make much sense.  The plot is driven mainly by a Lolita-type femme fatal who can’t decide what she is: a scared little girl, a cold-stone killer or a heartless criminal mastermind.  Christie Burson [IMDB], the Lolita in question, may actually be a decent actress but her character development is completely schizophrenic and unrelateable.

The ending tries so very hard to be shocking but just ends up being silly.  Twice over, in fact (because you know a movie this shitty also has a twist ending!)  If you have any respect left for Cain or Madsen this will just serve to erode it further.  It’s depressing how low they’ve been forced to go.  Just stay away from this one.