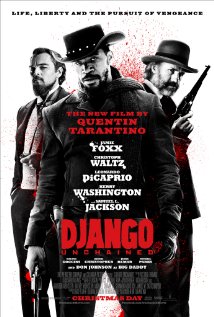 Quentin Tarantino’s genius really doesn’t lie, in my opinion, in filmmaking.  Taken scene for scene, line for line he really isn’t technically better than anybody else.  His genius is being able translate his love of film into a modern context and thus expose entirely new generations to the artistic languages of all-but-dead genres.  He’s delved into pulp crime (“Reservoir Dogs” [IMDB] and “Pulp Fiction” [IMDB]), horror (“From Dusk ‘Til Dawn” [IMDB]), Hong-Kong martial arts (“Kill Bill” [IMDB]), World War II (“Inglorious Basterds” [IMDB]) and several others.

In all of these cases he’s succeeded by passionately and uncompromisingly embracing the selected genre.  Whether any particular element is objectively good or bad never enters into consideration.  He doesn’t attempt to improve; he simply and gloriously celebrates.  With “Django Unchained” he reintroduces us to the narrative language of the John Wayne-era western.  Perfectly.

The story is classically paced but with a modern morality.  Django is freed from slavery by a charismatic German bounty hunter to help him on a job.  Afterwards, noting Django’s undeniable natural skills, he trains him as a partner.  The two embark on a quest to unite Django and his wife who was sold, as a punishment, to a brutal plantation owner as a “comfort girl”.  Of course the plan, eventually, goes pear-shaped.

Like many classic westerns, the story unfolds as a sequence of nearly self-contained vignettes each of which leads, like breadcrumbs, to the next.  Characters are introduced, dealt with and left behind quickly and efficiently in each segment leaving only our heroes and their next challenge to concern the audience.  While frowned upon in modern times as too simplistic, Tarantino embraces this technique here with no judgment or compromise.  His focused dedication to the form is what makes the entire movie work as well as it does.  We’re even given a ridiculous cowboy flourish at the end; something completely out of place in modern film but an almost essential requirement of the traditional high western.

This is a Tarantino film so there is significant violence, some is rather disquieting, but overall there’s a more genteel sensibility here than his other recent work.  No punches pulled in the area of racial interaction either and that may disturb some but, considering the time and personalities involved, it didn’t seem particularly exaggerated either.  In short, if you’ve survived any of Tarantino’s other films then this will be no problem.

“Django Unchained” is modernized in every way that doesn’t compromise its classic western sensibilities.  This is a movie that John Wayne or Gary Cooper would have understood deeply, but one that seamlessly introduces everything necessary to completely engage today’s audiences.  There’s absolutely no reason to miss this film.