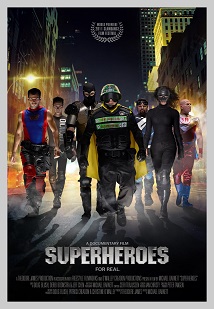 Only a small minority of people will ever donate their time and energy to the betterment of others.  An even smaller minority would ever consider joining a neighborhood watch.  Of that group only a tiny minority would actually exert effort outside their own neighborhood and even fewer would specifically target the very worst urban areas.  Within this tiny minority of selfless, giving people there is a vanishingly small subset – barely registering a wedge on the pie chart – of people who do all of that while wearing a costume.

This is their story.

Or at least some of their stories.  It was nice that the budget was large enough to allow a decent selection as we get to meet about a dozen people across a handful of major cities.  Some are, admittedly, clearly, harmlessly insane (Master Legend, I am looking at you) and others clearly at least slightly, harmlessly, deluded (sorry, Mr. Extreme) but most are clearly just honestly trying to do good.  In costumes.

The costumes may seem to be simply an eccentricity but as we learn there are many reasons for them.  In some cases there’s a practicality (protection or anonymity), others find escape in a persona and as one person happily admits: “it’s hella fun.”  The cross-section of motivations and personalities we see eliminate any possibility of standing pat on simplistic answers.

The movie doesn’t shy away from the ridiculous when it presents itself but neither does it ever treat its subjects with anything less than sincere respect.  And why wouldn’t it?  Yes these people dress up in costumes and patrol the streets as superheroes.  They also spend hundreds of dollars of their own money handing out essentials for the homeless; running toys drives for underprivileged children and raising awareness about threats in their areas.  We see a kid armed only with a megaphone stand down multiple drug dealers to clean up a local park.  Isn’t that, regardless of packaging, heroic?

This is an often hilarious, often thought-provoking but always entertaining look at the birth of a subculture.  Yes, we often laughed at these people but I’m not ashamed to say that I was also brought to tears more than once by the sheer power of their sincerity.  I may not be convinced that untrained, vulnerable people should take up careers as vigilantes but after meeting them I will say that having more people like them doesn’t seem like a bad thing.