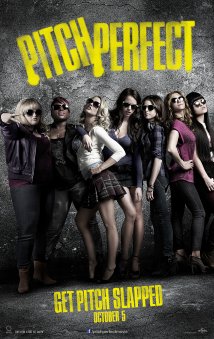 My 10-year old daughter begged to watch this movie about a cappella singing.  Why not?  The movie lets us know that a cappella singing is the coolest God-damndest thing in the entire world!  If you could smoosh extreme cliff-diving, lion-taming and sex into one glistening ball of awesome you might approach how cool a cappella singing is.  For my part I immediately shoved the movie into the corner of my brain where anything I’ve ever seen about “Glee” goes to wither and die painfully.

Why did I end up liking it so much?

It definitely couldn’t have been the hackneyed plot.  Yes, the focus of this movie are two competing a capella groups (there are no less than four at this small college).  Of course one group is all boys – jerky, egotisical, dumb-head boys.  The other group is all girls – perky, quirky girls.  Because of, um, things, they have to create a new group quickly.  Surprising nobody, the new members have to overcome their wacky differences to finally come together as a team.

Could it have been just how amazingly odd it was?  There are subtly surreal exchanges that are clearly smarter than they needed to be for the subject manner.  There’s a wonderful extended cameo by John Michael Higgins [IMDB] and the always-watchable Elizabeth Banks [IMDB] as the commentators for the many competitions.  There’s vomit angels.

It wasn’t the totally predictable and obvious Romeo and Juliet subplot.  Of course, our heroine is in the all-girls group and our hero is in the all-boys group.  They start to have feelings for one another and start spending time together when fraternizing the with the enemy is traitorous!  The trope was a cliché for thousands of years before Shakespeare and even with some subtle tweaks it’s pretty obvious here.  Not fatal, of course, but really obvious.

It might have simply been how surprisingly grounded the movie was.  A lot of modern movies attempt to make self-effacing comments about themselves or their genres.  It almost always comes off as a kind of confessional: we’re doing this but we’re also making fun of it so you can’t criticize (when in fact we really, truly can).  Here, on the other hand, there are self-effacing jokes about the genre that are both smart and, most importantly, subtle.  The movie isn’t so self-conscious that it beats you over the head with them.  If you catch them, great; if not, ah well.  That kind of confidence is insanely refreshing in what’s nominally a “kids movie”.

It wasn’t the competitions or the music.  The music was good, sometimes even great, but it really wasn’t really the focus despite appearances.  In the performance scenes, for example, it’s painfully clear that the people on stage couldn’t possibly make all the music.  While overall a minor issue, this does convey a marked lack of respect of the music that seems to carry through.  The competition is as trite as you could like.  Our heroines are as terrible as you could want… until they’re not.  It’s the same exact arc you’ve seen in any number of competition movies, good and bad.

If I’m being truly honest, might it also not be Anna Kendrick [IMDB]?  She’s insanely smart, more than willing to mock herself and just too freaking adorable for words.  Unfortunately, the script  positions her as an apathetic hipster.  Luckily, she handily rises above it and gives a nicely layered performance to what would have been a cookie-cutter role for many other actresses.  I can even forgive her for contributing to the “Twilight” franchise.

In the end I’m not really sure what makes this good.  But damned if it wasn’t good.  Even very good.  I guess sometimes even 10-year olds can have good taste.