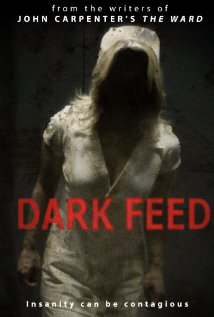 The aforementioned film crew sets up shop in the aforementioned abandoned hospital to shoot a low-budget horror film.  To set the mood we spend a little time hearing about the radically insane psychiatric experiments that used to be performed.  As time goes on we see more shots of drippy, slimy water and people start to go predictably crazy.

Oddly, the movie really isn’t as bad as you might think.  Everything is totally predictable, the acting can’t really carry the rather bland script and the special effects are short-bus special at best.  But as far as this kind of thing goes… really not bad.  Not good, mind you; oh lordy, lordy, not good.  But not bad.  Granting that the movie is crap by nearly all standards doesn’t mean that it can’t be some of the better crap in comparison.

They may have done significantly better by pruning the cast of characters and attracting better actors for fewer roles. No matter how good your location is or how many gallons of corn syrup blood you have, everything comes down to the acting.  More effort there and this could have easily approached average.