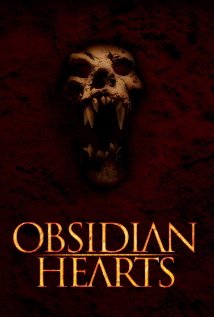 This isn’t a good movie.  In fact it’s a bad movie.  Bad movie!  Bad movie!  (Like most of the movies in the class it has an identity crisis.  It’s listed on IMBD as “Demon Hunter” but the available poster calls it “Obsidian Hearts”.)

It starts immediately with a ridiculously extended hand-to-hand fight scene that will remind you of the “Peter v Chicken” fights on family guy in that a) it goes on way too long, b) looks really stupid and c) will probably make you laugh in spite of yourself.

Most of the movie looks like an extended larping session taking place in the same section of  Sequoia National Park.  The fun part is they drive for hundreds of miles between these scenes then end up fighting directly in front of the same tree.  Those poor, poor trees.  They survive for thousands of years and are then forced to witness this.

I’m not saying that either I, or the movie, should be proud of this but the absolute most horrifying part is when they introduce a prostitute with one of the worst boob-jobs I’ve ever seen in my life.  It’s like some madman, having just finished sewing mouths to buttholes, decided to follow up by stapling oiled basketballs to a women’s chest.  Nipples aren’t supposed to point straight up in the air, folks.  That’s just wrong.

There’s nothing here.  You’ll laugh at the awful now and again but no so much to recommend it even for schlock fans.  It’s slow, weird and slow.  Just pass on it.