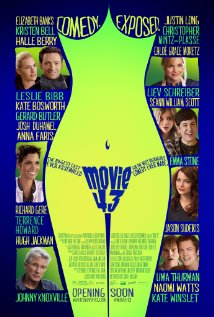 Movies like this collect well-known celebrities and, probably by intimating that they lack of a sense of humor if they won’t, convince them to spend a day or two creating often raunchy, but generally below average, short comedy films.  These are then thrown together with a loose wrapper story and tossed out to the public.

These movies seem to pop-up every few years.  1977’s “The Kentucy Fried Movie” [IMDB], 1987’s “Amazon Women on the Moon” [IMDB] and 2007’s “The Ten” [IMDB] are perfect examples.  The modern spoof movies enjoying such a resurgence recently follow similar patterns.  Mel Brooks [IMDB] made a few but had much more success (and I have to assume more creative satisfaction) with his long-form genre satires.

There are usually enough chuckles to make the movies worth a look, but nothing approaching genius or even true quality.  Each short squeezes every drop of juice out of an average, mostly coarse, joke.  “Hey, what if a guy had balls coming out of his neck?”, “What if superheroes did speed dating?” or “What does a normal guy do when his girlfriend asks him to poop on her?”  They all end terribly (as, let’s face it, most sketch comedy does).

These movies are passable distractions.  You sometimes get to see actors that should know better say ridiculously filthy things and there’s often boobs.  Boobs are nice but, despite some popular opinion to the contrary, they really can’t support a whole movie.