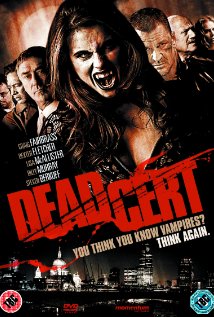 The tagline for this one is “You Think You Know Vampires?  Think Again.”  I’m not sure if that’s a dig at sparkly vampires or not but these vampires, here?  Pretty damn average if you ask me.

The movie has a (very) slow burn.  A club owner is introduced to Foreign gangsters to complete some shady business but they have plans of their own.  The first two thirds of the movie is pure crime-melodrama and will likely put horror fans into a foul mood if it doesn’t put them to sleep first.

I noticed some similarities with “Dracula” (the novel, not the movie).  They were weak but they kept teasing that this might end up more than it was.  After watching them continuously leave obvious potential connections untouched I had to finally concede that this was simply wishful thinking.

There’s some good performances here; but more terrible ones.  There’s some clever ideas; but more trite ones.  It’s slower than most genre fans will probably accept but doesn’t make up for it by building mood or tension.  This might have been decent with a few tweaks but ends up being mostly dull.