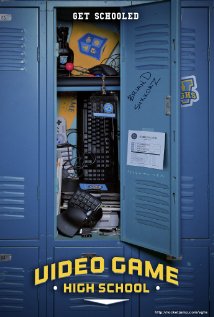 [This isn’t technically a movie.  Rather it’s a web series whose first season has been cut into a movie for distribution on NetFlix.  I’m going to treat it like a movie.  So there.]

This entire thing is unabashed, shameless pandering to the video game crowd.  In this world video games are king.  Good players are the rock stars and every teen wants to go to “Video Game High School”.  Brian D is an everyman schlep who accidentally frags the school’s star, “The Law”, and gets a scholarship for his trouble.

Of course the school is home to a wacky cast of misfits that Brian has to navigate while a vengeful “The Law” works to make his life even more miserable.  He connects with a few oddballs and gets a crush on the school sweetheart.  There’s ups and downs.  The basic plot is older, much older, than video games.

The movie straddles the increasingly popular no-man’s land between amateur and professional.  On one hand it clearly had a budget; on the other hand that budget was clearly really low.  A few of the cast have decent TV careers and there are few interesting cameos but most are complete unknowns.  One of the problems with casting your fiends is that casting becomes less a “who’s right for the part?” question and more a “who’s around?” one.

Most of the “kids” at the high school are clearly in their late twenties and several are obvious thirtysomethings.  A character written as an intimidating bully is played by an actor that looks most like a teddy-bear.  The actors try their best to work around the casting limitations and, to their credit, mostly pull it off.

There is absolutely no point – at all – in watching this if you’re not an experienced, dedicated vidiot.  The situations, the gags and the language are all deep-geek and there’s no concessions made for outsiders.  If you fit the bill then you’ll likely enjoy this quite a bit.  It’s not perfect – far from it – but its sincerity and love of the topic allows it to rise above its problems handily.