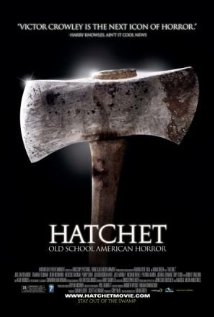 A group of people head out on a shady nighttime “Ghost Tour” of the New Orleans swamps. They hear the story of Victor Crowley , a deformed swamp person accidentally killed by a hatchet to the face  years earlier. Their inexperienced tour guide runs the boat aground, sinking it, near Crowley’s abandoned cabin and discover that he’s only mostly dead. In fact, he’s running around dismembering people.

The movie doesn’t take it seriously and that’s its biggest strength. It’s run purely and faithfully from the classic slasher-movie playbook. People scream and run. Crowley pops up and grabs one of them. Anatomically improbable gruesome death scene occurs. Rinse and repeat. No, there are no attempts to break new ground, but it tills the old ground very well.

The acting is above average for the genre and you’ll likely see several familiar faces among the generally successful cast. The budget is used well and avoids the common downfall of biting off more than it can chew. Thankfully the director chose to spend his budget on purely practical effects. Not everything he tries succeeds, but failed practical effects are always worlds better than failed CGI.

Featuring many cameos from horror movie legends the movie is a love letter to the peak of slasher popularity in the 80’s. It doesn’t always work but it’s always sincere. Although it’s a bit older (2006), in the current sea of cookie-cutter knock-offs, remakes and low-budget money grabs sincerity still floats to the top more than anything else.