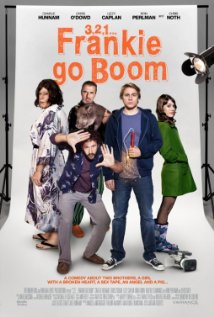 Bruce (Chris O’Dowd [IMDB]) is a jerk. A royal douchebag. A super-deluxe, extra-cheese, leather-trimmed, super-sized asshole. He also styles himself a film director and spent most of his life torturing his little brother, Frankie (Charlie Hunnam [IMDB]), on film for his own amusement. After an egotistic meltdown and months in rehab he’s back. Frankie’s having issues of his own. Having recently been left horribly at the altar he’s assumed a self-imposed exile to try and finish his novel. Parental guilt brings him back home to celebrate his brother’s sobriety and things go south from there.

Frankie runs into an girl, Lassie (Lizzy Caplin [IMDB]), distraught by her fiance’s cheating. He brings her back to his room and she attempts to seduce him. While she ultimately succeeds it’s a long road through  his emotional baggage before he can “rise to the occasion”. Happily he and Lassie seem to finally make a meaningful connection. Unhappily Bruce has secretly filmed the whole thing and uploaded it to the Internet as a movie “Directed by Bruce”. Of course he didn’t bother to discover that Lassie is the daughter of his psychotic, gun crazy former TV star partner before he did it.

Frankie tries to regain his dignity – and Bruce tries to save his ass – by getting the movie taken down before daddy gun-nut can see it. Frankie is also trying to spare Lassie the embarrassment and not let Bruce’s douchebaggery completely ruin his chances with her. The script forces in a little too much slapstick but returns to center before things get out of hand. A few of the tertiary characters, such as Bruce’s “producer” and his ever forgiving mother, are annoyingly one-dimensional, but the primary characters are all excellent.

I may have mentioned, repeatedly, in the past that Chris O’Dowd makes everything better. That’s still true. Notable here is that he steps outside his comfort zone quite a bit. His characters are usually flawed but lovable; broken but well-meaning. Bruce, on the other hand, is professionally self-centered and completely oblivious to the feelings of others or the ramifications of his actions. Bruce is somebody that you want to punch in the face just to see him bleed.

Now that Charlie Hunnam is garnering well-earned lead roles he seems to be picking well. This is also a departure from his recent efforts. Frankie is a neurotic, fragile doormat and Hunnam plays him with a sweet exasperation that ingratiates him with the audience. Lizzy Caplin is a cute and approachable love interest even if I didn’t really feel any chemistry between them. Stealing a huge slice of the movie is one of my eternal favorites, Ron Perlman [IMDB]. He has a small – but mesmerizing – role as perhaps the ugliest transsexual you’ll ever see. Sure, Ron Perlman in drag may be cheating in the scene-stealing game, but he makes the most of it and it’s impossible not to smile.

The move is warm, funny and likable. It does try too hard in places, but that’s always better than not trying hard enough. The ending is just as predictable as any other rom-com but it’s a hell of fun ride.