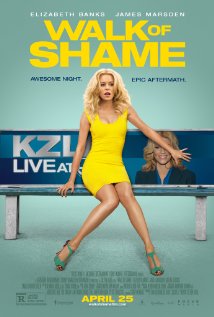 “Walk of Shame” on IMDB

Meghan is a straight-laced local news anchor. When she’s turned down for a national job her friends convince her to hit the clubs and let it all hang out. After drinking too much, meeting a nice guy and heading back to his place she finds out that a) she’s still up for the job if she can get to work on time, b) that along with much of her dignity she’s also lost her money and her car and c) that she has no idea where in the hell she is.

So, it’s a fish out of water movie that slides into an embarrassment farce and then slams headfirst into a rom-com. Meghan is demure, but her friends convince her to wear a super-hot yellow dress! Meghan is sheltered, but ends up befriending local crackheads! Meghan is goody-two-shoes, but steals from children! There’s no reason this movie should work.

No reason except for one, that is: Elizabeth Banks [IMDB] is freakin’ fantastic. She makes you adore her in the first ten minutes and never lets up. She’s sexy as hell, but unlike many female comic actors she doesn’t rely on sex to sell herself. It’s an afterthought – an appreciated one, to be sure – but an afterthought nonetheless. She’s unafraid to get stupidly, hilariously physical and it works. She’s utterly convincing as an awkward, nebbish, ridiculously nice person who’s stuck in the worst day of her life.

It’s a sweet movie, with a great performance by an insanely talented comic actresses. You’ll smile a lot and may even laugh a few times.