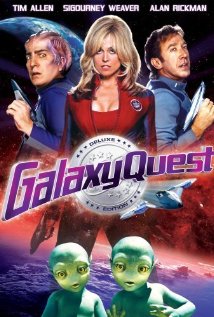 In celebration of its 15th anniversary, MTV has put together an oral retrospective of this classic. In “Galaxy Quest: An Oral History” they interview the cast, the crew and the creators to paint an intensely interesting narrative of how the movie was made.

I’m not going to review the movie. It’s damn near perfect and that’s that. Instead I’m going to wax nostalgic about some of my favorite things.

Although the initial theatrical release was somewhat disappointing we were lucky enough to see it opening weekend on a nice, big screen. The movie almost instantly brought the audience together like few do and is, hands down, one of my favorite theater experiences.