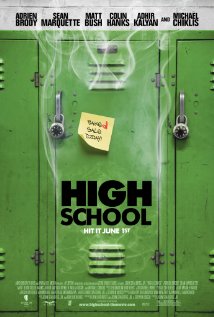 Being on top is hard. Being in high school is hard. Being on top in high school is really hard. So it’s easy to forgive Henry (Mat Bush [IMDB]) for blowing off some steam when he reconnects with an old friend and, um, partakes of the herb. Problem is that his overbearing dean has also just announced mandatory drug testing for the next day. So a plan is hatched to invalidate the test by ensuring that every single person that takes it, fails it.

I’m likely not the target for this, which may explain why I had so much trouble getting into it. There are some quality actors giving good performances. Adrian Brody [IMDB] as a tattooed psychopath, Colin Hanks [IMDB] as a well-meaning administrator and an unrecognizable Micheal Chiklis [IMDB] hamming it up as the evil dean. The story is trite, but trite can often serve as the foundation for something more meaningful.

My main problem is that the movie is just so… mean. This isn’t the fun, devil-may care stoner movie . Essentially at every turn the plot moves into darker territory than necessary. Pot isn’t the fun little diversion that pushes everything just a little left of center… it becomes an overwhelming force that makes good people do bad things and bad people do even worse things.

This isn’t stoners trying to get that special burger, standing up to squares or killing witches. Instead they steal, cause havoc and act almost every kind of selfish there is. You won’t leave the movie liking these guys, and without that none of the rest matters.