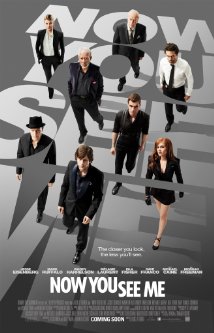 “Now You See Me” on IMDB

I like magic. Good magic, that is. I have an appreciation for the craft, science, dedication and sheer, brazen chutzpah that it takes to do magic well. Magicians spend nearly unbelievable amounts of time perfecting what most people would consider meaningless skills. Which is exactly why they get away with so much: people can’t believe anybody would spend so much time for apparently so little return.

This movie is about magic, but that kind of hollywood magic that real magicians tend to chafe at. In the movies, at least, hypnotism always works perfectly and can make anybody do anything at any time. Magicians are always masters of multiple, often nefarious, skills (such as lock-picking, street-fighting, stunt driving and computer hacking). They also have limitless resources, making anything that seems truly impossible solvable with advanced, but fictional, technology.

In this case four magicians from different circumstances and disciplines, are anonymously approached and given plans for an incredible series of tricks/heists that only they can pull off. Jesse Eisenberg [IMDB] is the charismatic showman, Woody Harrelson [IMDB] is the smartass mentalist, Dave Franco [IMDB] is the street-smart hustler and Isla Fisher [IMDB] is the flamboyant escape artist.

Fisher’s also woefully underutilized through out the movie. As an escape artists she’s not even given the questionable distinction of being the group’s locksmith, a job that migrates to Franco. The three men’s talents are absolutely essential to the plan, where her contribution is all but completely glossed over. I’m comfortable that it wasn’t a conscious decision, but it was uncomfortably obvious.

Mark Ruffalo [IMDB] and Mélanie Laurent [IMDB] are the Scully and Mulder-style agents sent to stop them. Morgan Freeman [IMDB] is hoping to make millions from exposing them. The action is contagious and stylish. The tone is playful and well-suited to the theme. The A-list cast came to play and the script was tight and smart, if rather full of slightly realistic dumbassery.

Which brings us to the crux of the matter. The movie refuses to let little things like facts get in the way of its story. No, flash paper doesn’t work like that. No, hypnotism definitely doesn’t work like that. No, there’s no reason to use a giant mirror if you’re already there. You’ll have to check very specific parts of your brain at the door for this one, but you will be rewarded for it.