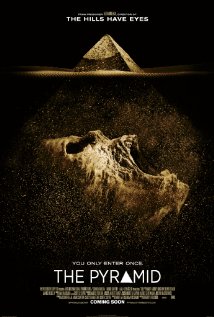 “The Pyramid” on IMDB

This is one of the new breed of hybrid found-footage movies. In the past filmmakers invented all new classes of mental gymnastics to explain why somebody would continue filming while a monster gnawed away at their ankle. Here, as in other recent offerings, “found” footage is intermixed with traditional cinematography to provide flavor without tying the whole production  down.

In this case, a documentary film crew – because sometimes the classic set-ups are all you need – are following a father/daughter team of archeologists who have discovered, and are just about to finally enter, a bizarre pyramid in the Egyptian desert. When forced by political unrest to leave the site early, they make the rash decision to enter the pyramid without the proper precautions. Amazingly enough, things don’t go well.

The plot starts slow with traditional jump scares and hints of monsters. Tension is built using old, but effective, methods. Dark corridors, collapsing architecture, glimpses of weird creatures and the like dominate the first act. After this we move into full monster mode and way too much pseudo-archaeological babbling.

The last act is the weakest, by far. Once we leave the shadows, the quality of the effects drops dramatically and the confusion-factor increases exponentially. More damaging, the monster itself just isn’t that interesting. It howls and rips people into pieces well enough, but lacks anything like a personality.

This is a decent, old-fashioned monster movie hamstrung by a wonky, over-worked ending. It has some gore, but would still make a fun slumber-party movie for the teeny-set. As long as you don’t expect much more from it, you should have a decent enough time.