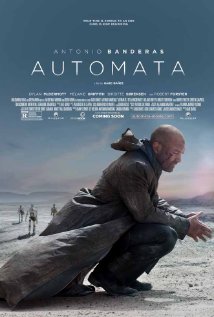 Despite it seemingly being tailor-fit to my taste, this completely failed to register on my radar when it was released. It was only when I started researching movies to include in this Month of A.I. that I discovered it.

The human race is attempting to recover from a series of massive solar storms that nearly drove us extinct and left much of the planet a uninhabitable desert. To assist in the massive rebuilding effort, the ROC corporation has mass-produced an army of versatile robot workers with advanced A.I. They are guided by two inviolate laws: firstly, that they can never harm or allow a human to be harmed and, secondly, that they cannot improve or repair themselves or any other robot.

The primary motivation in the film, obviously (this is a movie, after all), is the violation of these laws. The obvious option – of having robots able to harm humans – is thankfully ignored. Instead, the film focuses on the more interesting idea of the robots striving to improve themselves. How these laws were developed and protected is also one of the more interesting reveals in the story.

Antonio Banderas [IMDB], in one of his best roles in years, plays Jacq, a ROC insurance agent who’s expecting his first child.  A corrupt cop (Dylan McDermott [IMDB]) has reported that he shot a robot because he caught it repairing itself. Jacq is assigned the case and assumes that a human “clockmaker” is illegally modifying the robots. He’s been promised a transfer to a safer city if he completes the assignment.

The unnamed city is essentially indistinguishable from Blade Runner’s [IMDB] iconic Los Angeles, albeit with fewer people, and the movie concedes this with many subtle references to that earlier film. That said, this particular brand of dystopia is becoming more than a little dull. We see the same rain-covered filth, smiling, holographic advertisements and plastic clothes. Paying respects to the classics is appreciated, but originality would be more so.

The robot design is excellent. For the greatest part, they’re realized with practical effects and impressive puppetry. They have an amazingly effective sense of mechanical weight and movement that grounds them in the frame and allows for visceral, meaningful interactions with their human counterparts.

Those humans tend to pale in comparison to the machines. The character of Jacq is given some dimension and Banderas provides an excellent, if uneven, performance. Everybody else we see is mono-dimensional. With a few exceptions – seemingly to create a ready pool of victims – humans are nasty, brutish and unsympathetic.

The ending sadly devolves into poorly executed action-movie clichés. It felt like a misguided attempt to cater to an audience the movie had already abandoned. Rather than an insightful examination of motivations, we’re told simply: humans are bad, robots are good. A more cerebral, thought-provoking climax would have been much more appropriate.

Automata succeeds more than it fails. It shines when it slows down and ponders the ideas it’s presenting and the richness of the world it’s created. It falters when, seemingly out of insecurity, it tries to “pump things up” with car chases, explosions and gunplay. It’s good, stylish, thought-provoking sci-fi that lacked the confidence to reach true greatness.