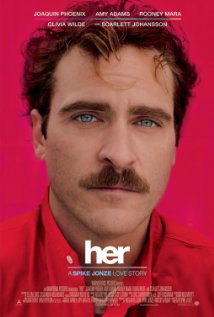 After starting it, I was instantly convinced that I would love this movie. I also instantly regretted waiting so long to see it. In some cases my initial reaction is wrong. The movie squanders it, tosses it away, and I feel betrayed. In this case it somehow just kept getting better.

Fundamentally this is a love story.  Theodore (Joaquin Phoenix [IMDB]) is smart, personable and insightful, but depressed about his recent divorce. A writer at a service that offers personal, hand-written letters for those too busy or tongue-tied to write their own, he’s incredibly intuitive about other people’s feelings but chronically unable to share his own meaningfully. Until he meets Samantha (Scarlett Johansson [IMDB]).

Samantha is capable, generous, intelligent and funny. She’s amazingly intuitive and easily realizes what he needs, often before he’s aware of it himself. She loves Theodore’s work. Is it any wonder that he falls for her?

Samantha, by the way, is an Operating System.

Underlying the entire film is a wonderfully realized view of how personal technology will advance. Small earpieces and a tiny folio featuring a screen and a camera are the main interfaces to your communication, information and personal data. Voice recognition and speech synthesis are ubiquitous, seamless and frictionless. Video games are full room projections with voice and gesture control. The technology presented feels familiar and warm, hiding almost completely the tremendous thought and dedication to detail needed to present it.

Samantha is the next level. An artificially intelligent personal assistant and confidant with the ability to grow, learn and intuit a user’s moods and needs. She’s presented as, and seems like to the audience, a natural, expected progression in human-computer interaction. A.I. isn’t to be feared here, but marveled at. At no point will there be the killing of all humans.

Through a fascinating narrative, the story entwines the evolution of their relationship with the evolution of A.I. itself. How does a relationship move forward when one person is still hung up on their ex and the other can carry on over 6,000 simultaneous conversations? The challenges facing our couple are, in a wonderfully approachable way, both bizarrely unique and comfortably clichéd.

The various moods of the piece are sculpted via countless subtle strokes. The bright, pastel coloring. The airy, non-intrusive soundtrack. The close, personal camera work. They all create an overall sense of lighthearted fancy framing powerful moments of deeply moving humanity. It’s a soft, quiet experience that invites your participation rather than demanding it.

While clearly a romantic drama, there are also many hilarious moments throughout. Absolutely delightful, laugh-out-loud exchanges. Many of these are decidedly mature (and, yes, sometimes immature) that work to keep the more heady themes grounded. Others exist, seemingly, just to remind us that sometimes life is a little absurd.

Both Phoenix and Johansson give beautiful, deft performances. Johansson, an actress whose skill is sometimes over-shadowed by her body, is especially compelling in her audio-only role.   The supporting cast perfectly balances the leads. There are excellent performances by Amy Adams [IMDB] and Olivia Wilde [IMDB]. Chris Pratt [IMDB] also has a small, but important, non-marquee role that shows you just how much difference a year (and a billion dollars at the Box Office) can make in Hollywood.

In a sea of dystopian, apocalyptic science-fiction this is a rare vision of the future filled with hope and, if not joy, then at least the potential for it. It’s a beautiful, moving achievement that’s even better than you’ve heard it is.