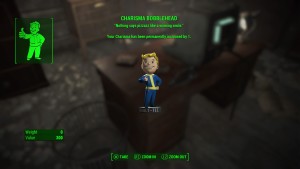 Everybody loves me even more now!

I continue my play diary of Fallout 4. I resumed cleaning up some of those oh-so-urgent requests that I’d gathered; as usual I ended up getting distracted along the way.

I helped Jack Cabot with some family problems that had been simmering for a few centuries, did the whole “Criminal Minds” thing with a rather nasty avant garde artist and helped the Travis the DJ gain some confidence.

MacCready and I also got much closer. Don’t worry, Piper: not too close! I discovered the Charisma Bobblehead, which got my Charisma past where I needed it, so finally took the “Local Leader” perk. I was then able to set up helpful, but confusing, settlement supply lines.

MacCready is Mayor MacCready All Grow’d Up! 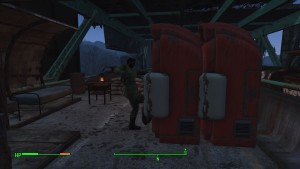 It was a tough fight, but made slightly easier by the fact that Barnes completely ignored me in favor of kicking this soda machine.

MacCready was still worried about those Gunners, Winlock and Barnes, that were strong-arming him. He suggested that we discuss the issue with them – discuss with bullets. They were, as seems to be the Gunners thing, barricaded atop one of the old elevated highways.

This was one of the tougher campaigns I’ve undertaken, involving a power-armored Gunner Corporal, a surprise Assaultron and a whole lot of grenades. (Enemies seem to enjoy grenades much more than previous entries in the series. I seem to spend the majority of some fights on fire from Molotovs lately.)

MacCready – who sounds exactly like Nolan North, but is actually Matthew Mercer – laid a bomb on me after this: he’s the little, foul-mouthed urchin that ran Little Lamplight in Fallout 3! 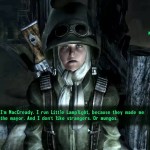 Yes, this snot-nosed little brat from the Capital Wasteland is… 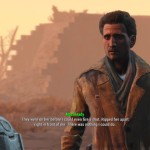 … this snarky, little pain-in-the-ass from the Commonwealth! 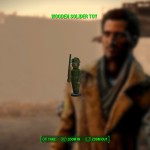 He gave me a deeply symbolic toy soldier, hand-crafted by his dead wife. The game instantly categorized it as “Junk”.

After leaving Little Lamplight, he ended up married to Lucy (also in Fallout 3) and together, they had a son, Duncan. Lucy was later killed by ghouls, but MacCready was able to save Duncan only to have him contract a bizarre wasting disease. When he heard of a potential cure available in the Commonwealth, he headed up, found me and finally asked for help in retrieving it. 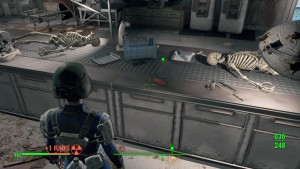 The cure! And some people it utterly failed to help!

Together, we headed to the Med-Tek research facility, a ruined, labyrinthian hive of ghouls. The cure was, naturally, at the farthest, lowest point in the facility and guarded by an angry Glowing One. After obtaining it, MacCready, oddly, decided to hang around. Instead of a personal delivery, we dropped it off with Daisy in Goodneighbor, who promised to get it to Duncan on the next caravan.

Helping MacCready get the cure finally pushed him over the edge into idolizing me (some people take far too long to realize how freakin’ wonderful I am). I now have the Killshot perk which gives me an insanely high chance to hit people’s heads in V.A.T.S. 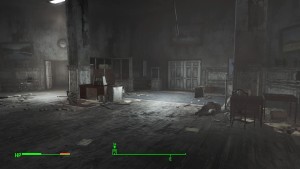 Seems the tidiness at Cabot House must be due to Jack’s mother.

Several days ago I helped the Cabot family recover a strange serum and track down their wayward Emogene. When I returned, Jack had received word that his secure Asylum to the North was under attack! We had to leave immediately!

I didn’t, but I’m ready now. Hey Jack, thanks for waiting!

The Asylum was overrun, but we made it to Jack’s office (and the Charisma Bobblehead) without incident. Jack confided to me his 400 year-old father, Lorenzo, was in the basement. Kept alive through the power of an ancient alien artifact, Lorenzo’s blood was the source of the serum (Lorenzo’s Oil, maybe?) keeping Jack and his family alive through the centuries. We descended to the basement, past more than a few oddities, for the final confrontation. 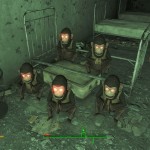 Looks like creepy monkey is having a slumber party. 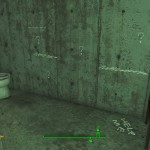 If this is a puzzle and not just the scribblings of a madman, I couldn’t figure it out. 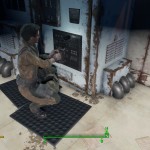 MacCready decided to change careers on the way. 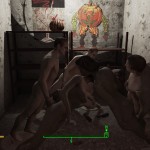 Here’s where all the (necessary?) asylum mannequins are kept… 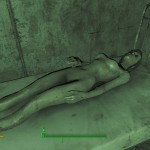 … except, of course, for that special one. 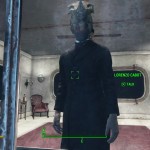 The man himself: Lorenzo Cabot.

I had the option of releasing Lorenzo, but I decided to trust Jack and kill him instead. He seemed fairly comfortable with the death of his father and the resulting loss of his own immortality. He told me to visit him at Cabot House in a week and he’d have something for me. 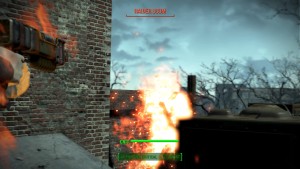 Moving on to a more recent request, Hancock in Goodneighbor asked me to check out the nearby Pickman Gallery. He’d had some disturbing reports from the area and the man he sent to check it out never reported back. Getting to the gallery was easier said than done as the entrance was crawling with raiders. I was able to get to the roof, which gave me the advantage I needed.

Moving into the gallery, MacCready and I discovered some very disturbing works of art and disturbed some very angry raiders. 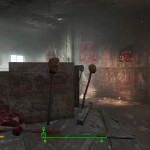 This is more of an “Installation Piece”. 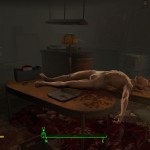 If those tables were even, it would make for a sturdier, safer work surface. Just sayin’ 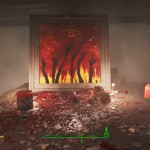 The discovery of an extensive tunnel system under the Gallery dragged this investigation out, but we finally found the artist himself and saved him from the raiders looking to take revenge. 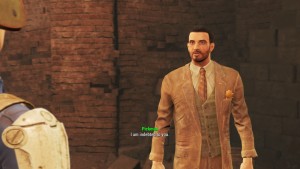 He looks pretty tidy for somebody that’s spent the last few hours fighting raiders in a sewer.

He was so grateful that he gave me the key to a hidden safe in his gallery; still, he was a serial killer. I shot him in the face, on principle. The game considered this “murder”, by the way. Not sure why shooting a gunner in the head from the woods isn’t murder and doing the same to a serial killer is, but that’s Fallout logic for you.

Returning to Goodneighbor, Hancock was happy to have the situation resolved. We dropped into Diamond City to sell our loot and got caught up in a last minute plot by Vadim Bobrov to give his friend, Travis, the inept D.J. of Diamond City Radio, some confidence. This involved the usual: staging a bar fight, getting him together with a girl, and storming an armed raider encampment to rescue Vadim from his less-than-savory business partners.

Having resolved all of that, Travis is a transformed man. More importantly, so is his radio personality. Diamond City radio is actually enjoyable, if not as much fun, to listen to!