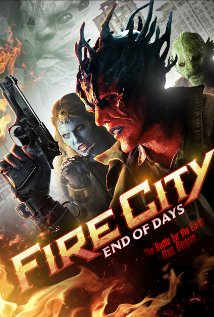 The movie is set in a soul-crushing tenement building. A sleazy drunk threatens to rape a little girl because her mother “isn’t taking care of him right.” A young couple wallow in a mutually abusive relationship. Drug addicts lie unconscious in their own urine. The local dealer, Vine (Tobias Jelinek [IMDB]), maintains a semblance of order to keep a low profile and protect his business interests.

He’s also the enforcer for the group of demons that live among, and feed off the misery and fear of, the humans. The demon Cornelia (Danielle Chuchran [IMDB]), a member of the mystical “Interperaty”, leads the demons and works to increase the production of their “herd”. Humans, of course, can’t see them for what they are and remain oblivious to the manipulation.

The humans suddenly, without explanation or warning, become preternaturally happy. They shed their despair and begin to cherish each other and work to improve their lives. Other demons quarantine the building to prevent this “sickness” from spreading. Vine must determine the cause before he and his fellow demons starve to death. His investigation leads him to consider his place in the world and ultimately into direct conflict with his community.

The movie is low budget, and has some problems because of it. What’s impressive is how well the team was able to convey such a complex story in spite of budget limitations. The practical and makeup effects on display are very impressive, even if they are coupled with (thankfully very limited) less impressive CGI. The team clearly knows how to get the biggest “bang for the buck”, a skill many budget-limited filmmakers lack.

The emphasis is on mood and dialog, not action. This, of course, means that your ultimate success lies with your actors. If they can sell your story, the audience will forgive just about anything else. Happily, they can. Jelinek does the tortured outsider thing very well and Vine’s eventual transformation feels natural and fluid. The singular drive and focus that Chuchran gives Cornelia counterpoints Vine’s confusion and doubt very well.

All the acting isn’t as successful, but there isn’t a single embarrassing performance. This is all the more surprising considering what’s being asked of the cast. The script is clearly intent on world-building and wastes no opportunity – or character – to do so. It does fall to exposition-babble in some places, especially in the third act, but I forgave it easily. It is, at least, an interesting world they’re building.

Overall, the movie felt, in the best possible way, more like a television pilot than a stand-alone feature. It sometimes works harder to establish the setting than to clarify the current story. This would be potentially beneficial to future installments, but risks clouding the current story. The ending is also rather abrupt and inscrutable; like something that the creators would expand on later. That said: if this were a pilot, I’d happily sign up for the series.

Impressive practical and makeup effects, good performances and an interesting setting push this well past any expectations based on its budget. Fans of television shows like NBC’s “Grimm” or ABC’s “Once Upon a Time” will likely find a lot to like. Those looking for effects-driven action should probably pass. This is well-executed, thoughtful, emotional fantasy and it’s not ashamed of it.