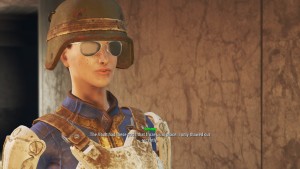 I continue my play diary of Fallout 4. I reached level 30 near the end of my last session, so thought a moment of reflection was in order. I’ve got a little over two weeks with the game under my belt; including several mini-marathon sessions over the holidays. I’d like to offer an overview of my character as she stands, the decisions I’ve made, and some of my thoughts on the game so far.

One of the more challenging aspects of this experiment in journaling has been avoiding spoilers. I haven’t been completely successful. For one thing, my son is playing the game as well, making it almost impossible to not get some outside intel. For another, I really enjoy the Fallout community. The memes, the let’s plays and sheer fun of immersing one’s self in something so many others love. I’ve kept all of that at arms distance, but it’s getting more and more difficult every day!

Obviously, there will be spoilers ahead (although not as many today as usual)! 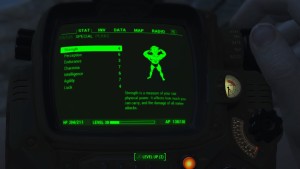 As I said, my character reached level thirty during my last session. I now have 211 hit points, have enlisted 17 settlements and discovered 133 locations. When I originally set up my S.P.E.C.I.A.L., I didn’t have any real idea of how the game would go. I quickly realized that settlement building – something my Minutemen buddies were really into – would require more Charisma. I also came to understand that the best toys, as always, need Science! That meant boosting Intelligence as well.

Between perk points and Bobbleheads I’ve raised my Charisma four points to 7 and Intelligence from 3 to 6. I also bumped up my Perception and Luck up a point each, to 6 and 4, respectively. 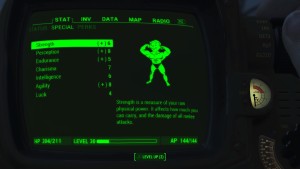 My S.P.E.C.I.A.L. stats with my normal loadout.

I’m torn about character configuration. With perks so utterly dependent on S.P.E.C.I.A.L., part of me feels that a more thorough introduction should have been made. One that would allow players to plan better from the start. At the same time, the game is generous enough, in that any perk point can be used to increase an attribute and leveling comes fairly easily, that mid-stream corrections aren’t painful.

At some point, considering its impact on Critical Hits, I’ll likely spend some points to push Luck up even further. My current favorite loadout also bumps up Strength, Perception, Endurance and Agility as well. 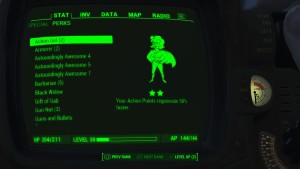 I tend to play Fallout as a sneaky, sneaker that sneaks. I like sniping, I hate melee. I really hate not knowing things – like what’s behind locked doors or on forgotten terminals. I would normally take all the obvious perks to support this style of play, but in Fallout 4 there’s also settlement building. This is a perk point pit.

I’ve also taken to not using my points as soon as I get them, and currently I have two banked. I’ll likely burn them the next time I can’t get into a locked box. It just might contain the freakin’ Zodiac Spear! It probably contains seven bullets and a wrench, but dammit I need to know!

Here are my current selections and some thoughts on each:

Now that Piper and I are, you know, lovers, I’ve been taking advantage of the Lover’s Embrace perk when I can. I’m tempted to explore romance options with some other characters, but I’m not sure how complex the game makes these relationships. Mass Effect may have made me gun-shy about love triangles. 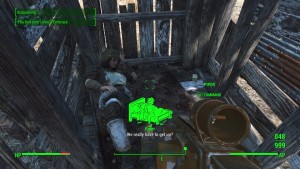 Time to get up and kill some raiders, sleepyhead!

My companions have been good to me. Piper’s Gift of Gab perk (which improves my chances in dialog checks) has gotten me out of some sticky situations. It’s also gotten me quite a few more caps in negotiations. MacCready’s Killshot perk (which gives me a 20% improved chance to hit somebody’s head in V.A.T.S.) is more useful when negotiations fail. Codsworth’s Robot Sympathy (+10 damage resistance against robotic energy attacks) is less applicable, but no less appreciated.

I only just realized that, despite all of my hard work for the Minutemen, I somehow have not gained Preston’s idolization. I’m not sure what his perk is, but I intend to take him with me on some of the remaining Minutemen quests and find out. 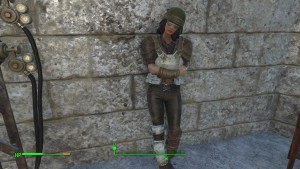 How could you not just love her?

I’ve been collecting magazines as I find them, of course. I like that Bethesda kept the magazines in the game and appreciate the permanent nature and variety of the perks, but I do miss the ability to temporarily boost your skills. In prior games you could down some drugs, use a magazine or put on some special clothes and open that nasty lock, pass an important speech check or hack a terminal normally beyond your skill. In Fallout 4 you either can, or you can’t: period.

My Story so Far (with some Favorite Fallout Follies) 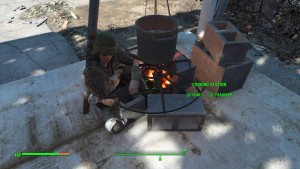 Piper was a little cold.

I started the game leveraging my Fallout experience to determine my S.P.E.C.I.A.L. choices and initial perks. This has middling results in Fallout 4. It really is a new animal in a similar skin.

I remain disappointed by the new awareness mechanism. I’ve come to accept it, although I feel that I’m getting surprised more often than I should (really, shouldn’t I be able to at least smell a super-mutant that’s right around the freakin’ corner?) I regret the points I dumped into Perception and likely would have withheld them had I understood the new system. 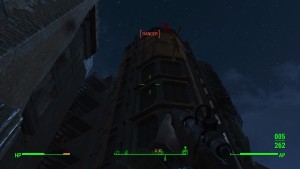 Shooting this guy in the head sent flying seven stories straight up.

This, and several other changes, seem to have been adopted specifically to eliminate the V.A.T.S.-heavy styles of play that the previous games fostered. Veteran players have to fight the inclination to activate V.A.T.S. at the last possible moment, when an enemy is inches away.

The new “slo-mo” system ensures that nearby enemies will likely get in a hit (often moving out of V.A.T.S. range completely) before you can take them out. New enemy behaviors – like the last second speed boost enjoyed by ghouls and the burrowing tactics of molerats and radscorpions – also work to temper the overall effectiveness of V.A.T.S. 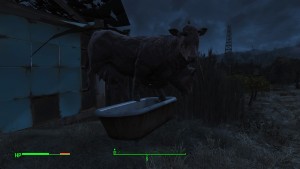 My Brahmin does this thing…

I role-play as a good-natured helping hand. One that shoots people in the face from the shadows. People that deserve it. Working with the Minutemen appealed to my play-style, and seemed like a relatively safe way to get into the meat of the game without alienating anybody. At some point, in Fallout games, you’re going to be forced to alienate somebody, and I prefer to put those decisions off for as long as possible. This is why I’ve left the Brotherhood of Steel dangling without a decision. 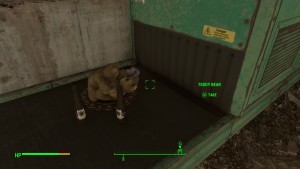 There’s a lot of teddy bear sex in this game.

Although it’s apparently bugged some people, I’ve had very little problem with the new four-way dialog mapping. The custom dialog options afforded by perks like Black Widow or Child at Heart are missed, but in exchange conversations seem to flow more smoothly, more naturally than in earlier games.

Companions remain a mixed bag. They’re one of the few things that don’t seem to have enjoyed significant retooling. I adore their personality quirks, character growth and interesting missions. I’m annoyed and frustrated by their clearly purposeful habit of blocking doorways, propensity to get lost, and blind charges at overly powerful enemies. They’re also constantly stepping into my line of fire. I still love my buddies, but I was hoping to see some improvements in their general behavior. 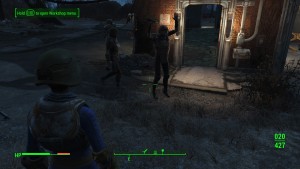 In a similar vein, I was hoping that Bethesda might have taken the criticisms of their inventory management systems to heart. With all of the community mods to improve on this in both Fallout and Elder Scrolls, there was hope that some of those features might appear in Fallout 4. I want to sort items by how they’re used. I want to sort guns by their ammo, armor by body part, notes and memos by acquired time, etc. I want to feel like I’m not constantly fighting with my inventory. 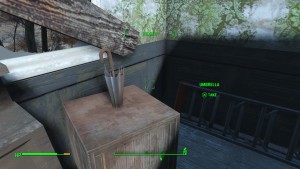 A table with an umbrella-stand complex.

Finishing up the gripe fest, settlement building and I have a seriously tumultuous love-hate thing going. I’ve discussed this at some length previously, so I won’t get into it again. Suffice to say: that rose has thorns.

On a positive note, the freedom afforded to the developers by seven years of technological advancement is much appreciated. The complexity of the environments is amazing. The integration of external and internal environments in many places creates a significantly more visceral world. More excitingly, verticality has truly come to Fallout with large, explorable skyscrapers, catwalks, fire escapes and plentiful elevated highways. 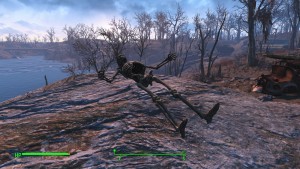 While nobody plays Fallout games for the graphics, the bump hasn’t been ignored. The new lighting model, emergent weather patterns and environmental effects certainly don’t hurt. Other games may look better overall, but Fallout 4 has still awed me with some deeply impressive imagery.

As I move into level 31 and beyond, my plans are simple: continue with the Minutemen, get to know more of the terrain, and push back any decisions that might lock me into a path until I’m ready dig. I’m still partial to synth independence and still have no real reason to be. I also assume that neither the Brotherhood of Steel or The Institute will share those feelings and I’m steering clear of them both for now, at least.

Of course all that means that I’ll be ignoring the search for my poor son even longer. I can live with that. I’ve barely touched the lower third of the map. Maybe a trip south will be relaxing?