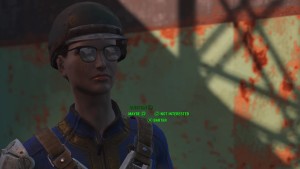 I continue my play diary of Fallout 4. Before I begin, an embarrassing admission: I’ve been permanently banned from Reddit’s /r/fo4 for posting these diary entries. They were considered spam. I disagree, of course, but respect the decision.

I have no hard feelings towards the moderators. They’re just doing what they think is best. I will say that a one-strike-and-you’re-out perma-ban policy is harsh. It’s easier, to be sure, but it’s also lazy. People get better when they’re helped to get better; when they’re given a chance to do better.

I’ve been doing this site, in its current form, for over five years. I’ve produced hundreds of thousands of words of material. Almost nobody reads it. I earn nothing from it. Obviously I enjoy when people do read it – who wouldn’t? – but I don’t expect it. An audience would be nice, of course, but it’s not the goal or else I would have given up long ago.

For the little that it’s worth: I sincerely apologize if these posts have offended anybody. That said, back to the wasteland!

As I mentioned in my last entry, I was surprised to note that I hadn’t yet received Preston’s undying idolization. Seeking to rectify that, I sought him out at The Castle with a mind to correct the situation by doing Minutemen quests until he loved me like he oughtta. When I found him, I remembered why I left him.

Yes, Preston has caught the clicks. There’s nothing I can do: he just clicks all the time; the same sounds made by the weapons workbench. I’ve reloaded, saved, left him, taken him, moved him to other machines, talked to him and nothing works. He just clicks.

Ah well, Fallout glitches are half the fun, right? It doesn’t seem to affect gameplay at least.

Preston and I started a help-a-thon for settlements. We’re clearly into radiant quest territory since it seemed a random (but nearby) settlement would have an issue with a random place on the map that we had to clear out. I ended up in a yo-yo between Abernathy Farm and Sanctuary Hills and they sent me as far away as Lexington to deal with “nearby” threats.

My time with Preston seemed somehow… different. Maybe it was the clicking, maybe it was the near constant load screens or maybe I was just tired, but I was getting a weird “Benny Hill” vibe near the end of the session. Of course, it didn’t help that things like this happened:

Yes, Preston. Ignore the nuclear weapons: tell me how you feel.

As I said, this session was all about the settlements. While we did get back to some previously cleared locations, like the USAF Satellite Station Olivia, we also got to explore some new areas as well. The first of these, was the ghoul-infested College Square subway station; clearly based on Harvard Square. 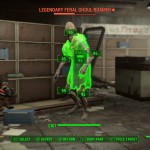 The station wasn’t too difficult, but it did have its moments. 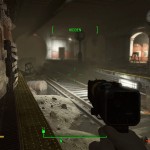 The subway stations are sadly generic. 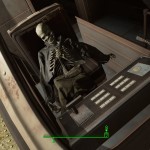 This guy was underground and in a metal box. Think he died of a heart attack?

I’m glad that there are subway stations in the game, the T being such a central aspect of life in Boston, but I think they failed at capturing the feel of the Boston subway. The coloring, signage, layouts: it all just seems wrong. Doesn’t affect gameplay at all, of course. I think we can also all be happy they didn’t create an expansive underground a la  Fallout 3.

Moving on, the next new place these demanding settlers wanted cleared was the BADTFL Regional Office. This was significantly more interesting, with several Easter eggs and a copy of Guns and Bullets for the taking. 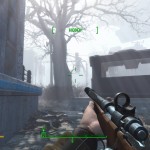 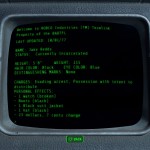 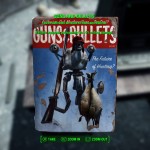 More interestingly, this location is clearly part of Nick Valentine’s history. There are several terminal logs and holotapes laying around that tell his tragic story. I assumed long ago, and it’s been spoiled heavily since, that Valentine – once I get around to rescuing him – will become a companion. This location is clearly part of his companion quest. I also assume, since these tapes are old, that Nick is a ghoul. Might be nice to have somebody to talk about old times with. 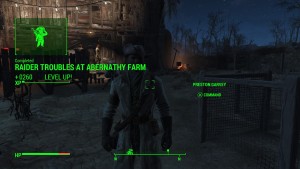 Gotta admit: settlement quests are a decent way to level up.

We completed the area, reported our success, and headed out several more times. We cleaned out the Wicked Shipping Fleet Lockup, the Corvega Factory (which has not gotten any smaller), and several other known locations. It also became apparent that something got glitched somewhere, because all of the requests from Sanctuary Hills were actually coming from a settler on guard duty at the Red Rocket Station. What was more annoying was that requests from Oberland Station were coming from its provisioner, who could seemingly be anywhere on the map. 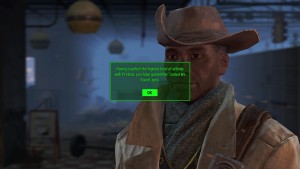 Finally, we were sent to a location I had meant to check out previously: the Super Duper Mart. We all have fond memories of the supermarket in Fallout 3, right? Entering the supermarket, it was clear it was a ghouly kinda scene. I snuck over and activated one Protectron, who immediately became one of my bestest buddies. Approaching the back of the store, Preston got all misty-eyed and wanted to talk. I was, finally, his everything.

We quickly cleared out the rest of the surprisingly large store and headed back, triumphant, to Abernathy Farms. I was almost immediately given several other settlement quests (I’ve got no less than three in my quest log), but having had enough of that decided to finally go fetch Nick Valentine and start working on enthralling another companion.