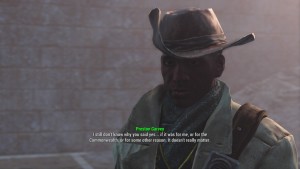 I continue my play diary of Fallout 4. After the epic battle with the Mirelurk Queen to retake The Castle, I assumed there would be some clean-up. Preston jumped on me right away to get things in order and report new settlement problems. A returning Minuteman veteran, Ronnie, also led me on a short adventure to reopen the armory.

I ended up spending the entire session working on various settlement quests, crafting and generally adding to the Minutemen empire of swampland and dirt farms. 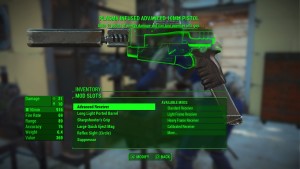 I found a very nice surprise in MacCready’s inventory: a Plasma Infused 10mm Pistol that adds 10 points of plasma damage to every shot. I remembered a battle with a legendary super-mutant that didn’t seem to result in legendary gear. I put it aside as a glitch, but now I’m wondering if companions can sometimes gather gear all on their own?

However he acquired it without my knowing, he didn’t complain when I took it from him. I added an advanced receiver, large quick eject mag, a suppressor and some other goodies. Now I have a suppressed pistol with plentiful ammo that does over 80 damage on a sneak attack. With the Killshot perk, those shots are always to the head. Even if I don’t kill them in one shot, they’re almost always crippled. 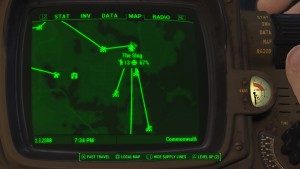 I took the Local Leader perk to create supply lines. Today I took the second level, which allows me to create shops and workstations. Even with that, to build the best stores and facilities, I’ll apparently also need to take a hodge-podge of other perks. I don’t understand why I need to be a doctor to build a hospital, but there you go.

Supply lines, especially, have been confusing the hell out of me. I understand the concept, but in practice it’s… odd. Supply lines, it seems, create a shared “junk” pile but nothing else. So if I put a gun in the workbench at Sanctuary Hills, I can’t retrieve it at the workbench at The Slog. If I do the same with a typewriter, on the other hand, I can. 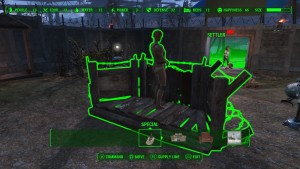 Yes, it’s clear this free spirit is assigned to defense, but how do you tell that when she’s nowhere near the guardpost?

I have to assign a settler to manage the supply line, but I can’t for the life of me figure out how to tell who’s doing it later. Then again, I can’t really tell who’s doing anything later. I know that if I highlight a settler that their “job” (plants, defenses, stores, etc.) will also be highlighted, but settlers often wander far from assigned locations. When they do, there doesn’t seem to be any indication at all whether they’ve got a job or not.

It’s not clear if the layout or distance of supply lines matters at all. I originally strove to create an efficient “supply circuit”, but lately I’ve just been sending everybody to The Slog because, why not? Can weather, raiders or anything else impact your supply lines? Who knows? 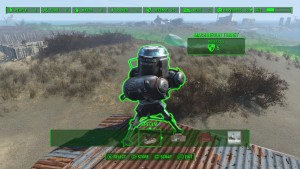 I am just littering the landscape with these guys.

My current habit, mostly out of frustration, is to head into a new settlement and immediately assign somebody to a supply line, just to get access to materials. I then build an extra three or four beds, add enough simple water pumps to cover the potential need, toss in some food if none is available, then set up basic turrets to cover defense. I then hit whichever of my settlements is over crowded and send two or three of them to the new settlement. After that, unless I happen to notice the incredibly subtle message announcing a problem, they’re on their own. 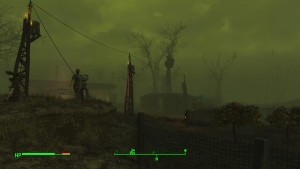 Today was settlements, settlements, and nothing but settlements!  If you have a problem, if no one else can help, and if you can find her (or Preston), maybe you can hire… Jimmy and Piper!

First up was a kidnapping situation at County Crossing. The rescue mission was straightforward and, as a bonus, I was able to collect a number of mines. Popping back to the settlement, I did the whole pumps-and-turrets thing and moved on.

Next was the picturesque, and utterly undefendable, Nordhagen Beach. They were looking to deal with raiders entrenched at an old racetrack nearby. Approaching it, I heard the announcer calling the race. I was abso-freakin’-lutely positive that I would be able to join in the fun, make some bets and maybe pick up a few quests. Nope. It was hugely disappointing, but this was really just a more complex-than-normal raider camp. I did have some fun turning their robots on them (and then exploding them), but it felt like a setting that was meant for more. 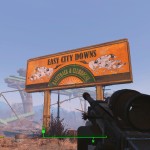 The only choice for the discerning gambler-slash-murderer. 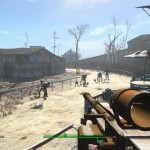 The racetrack . My money is on… the very fastest one. 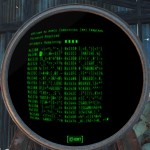 Of course a track would use round computers.

After clearing out the track and collecting a windfall of electronic components from the robot husks, I returned to Nordhagen Beach and – you guessed it! – added some pumps and turrets. I also threw together a small shack to increase the bed situation for good measure.

Finally, I met up with old-man Finch who requested that I retrieve his family sword. It was stolen by his son to impress a nearby group of raiders, “The Forged”. Bringing the son back was optional. 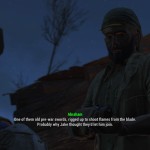 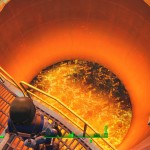 Yup. That’s one hell of a forge you got there. 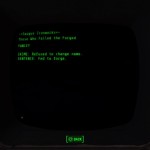 The Forged are really strict.

The Forged were, not surprisingly, holed up in a forge; the Saugus Ironworks, to be specific. Using my spanky new silenced pop-gun gun, I was able to sneak through the entire facility without getting spotted once. This was no doubt made easier by the fact Piper remained outside sitting in the woods (I accidentally told her to “wait” when I meant “follow”). 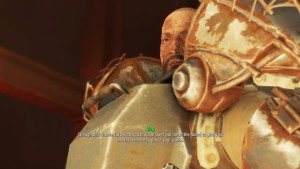 If you name your kid “Slag”, you really should expect something like this.

The final battle with the cult leader, Slag, was successful, but messy and completely unimpressive. I started by running away, into the main building. In the prior games, this would have given me a moment of peace, but in Fallout 4 this drags every enemy you were engaged with out the door with you. My load screen ended in a dogpile of laser guns and flamethrowers.

I was barely able to extricate myself long enough to heal. I picked off Slag’s henchmen fairly easily, but the big man himself was more of a challenge. Luckily he was also exceedingly poor at navigating stairways, so I had a small advantage. Appropriately, when I finally took him down, my lucky laser pistol turned him into a pile of ash. 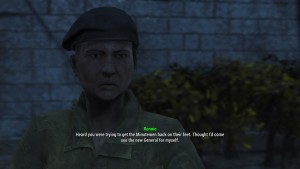 Ronnie’s got herself an attitude.

Happily, I was able to save the Farmer’s son in the process. Without Piper I had some severe weight issues and ended up trudging, slowly, overburdened to the nearby slog. I dumped the extra gear, headed back to pick up the son and return him and the sword back to Finch.

Having had enough of running, I fast traveled back to The Castle to gloat about my successes to Preston. Instead I was accosted by a grizzled former Minuteman lady. In-between insults, she let me know that we had yet to breach the armory and offered to lead me to it.

After traversing a short tunnel system (and alternately collecting and falling into the many traps set within it) we came upon Sarge, an honest-to-goodness sentry bot! What a find! Our defenses would be airtight! No, wait: he’s crazy and has to be killed.

Since he couldn’t leave the room he started in (which begs the question of how he got there in the first place), the battle was easier than it may have been. Having grenads and immortal companions definitely helped. After putting down Sarge, we finally broke through to the armory, but not before an amazingly fun Edgar Allen Poe reference: 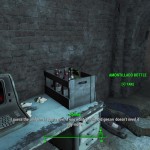 The former head of the Minutemen barricaded himself down here to protect the armory. 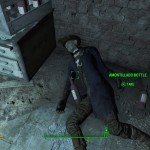 He found an old case of wine in a niche in the wall and drank himself to death. 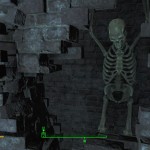 The wine wasn’t the only thing in the wall. Poor, poor Fortunato!

The armory was chock-full of awesome. Lots of plain old guns and ammo, a couple of mint-condition missile launchers, a Fat-man and a bunch of Tesla traps that I couldn’t use at all because of… reasons. 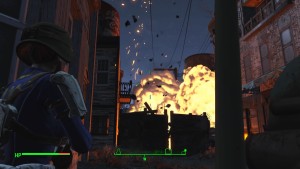 Yes, this could come in handy.

The big find was the plans and materials to build full-fledged artillery emplacements. Despite the fact that Piper and I had already rescued three settlements and defeated an insane sentry bot, Ronnie immediately got all up in my business about setting them up. Two mortar emplacements and two assigned settlers later and we were testing them against a completely defenseless little building.

I wasn’t wholly satisfied with that. I headed into town looking for some trouble. I found a quiet little encampment of super-mutants, tossed a smoke grenade over the wall and waited for the screams. I wasn’t disappointed.