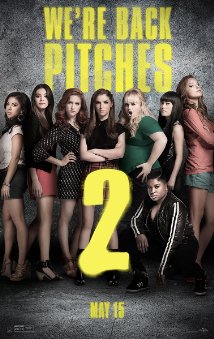 Nobody was surprised more than I when I thoroughly enjoyed the first movie (my review). It glorified a topic – a cappella singing – that I had, and still have, absolutely no interest in whatsoever. For this 40-something, it was a movie full of 30-somethings, playing 20-somethings aimed at tweens.

Shoot me, I liked it.

Like so many sequels, this can be adequately summed up as “more of the same.”  Like fewer, but enough, you could also add, “not quite as good as the first.” In the first, many of the most successful gags were based on breaking expectations. You didn’t know that the movie would push boundaries – I, for one, simply assumed it wouldn’t – so it was often hilarious when it did. Getting to know the characters, and being surprised by them, was a good deal of the fun.

The spontaneity of the first is here replaced by comfort; with the characters, the setting and with audience expectations. That makes this easier to watch, but simply not as funny. Still, it has it’s moments.

The plot is straight out of any 80’s teen romp sequel and absolutely predictable. Having won the national competition, the group has become fractured and lost their way. After a disastrous presidential command performance, they’re banned from the circuit. To get their groove back, they enter into an international underground competition that no American group has ever won.

This outing is directed by the amazingly talented Elizabeth Banks [IMDB]. Her and John Michael Higgins [IMDB] reprise their roles as the oil-and-water competition commentators in one of the most successful running jokes of the movie. The majority of the cast, headed by Anna Kendrick [IMDB], Brittany Snow [IMDB] and Rebel Wilson [IMDB], also return.

As trite as it sounds, it’s the truth: if you liked the first one, you’ll like this one as well. Perhaps not as much, admittedly, but there are definitely worse ways to spend an evening.