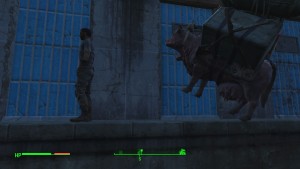 A terrible future where mutant cows sneak up on innocent settlers.

I continue my play diary of Fallout 4. Last time I begrudgingly decided to go with the flow and do every settlement quest that came along. I continued doing that much longer than any sane person would.

I was actually getting into it for a while. My companions seemed to enjoy it, I was still getting the odd (but increasingly rare) new location to explore and I was finding many things I missed in the old locations. Then I traveled to the Super-Duper Mart and was ambushed by a weird, stray behemoth. That put a bit of a damper on things.

One benefit to my adventuring: I gained six levels and am now level 49. I was so set on trundling through the missions I haven’t spent a single perk point… I’m seriously debating skipping new skills and just maxing out Luck. Maybe a point or two to Endurance or Strength?

Settlements and I are Done (for Now) 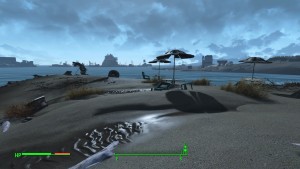 Revere Beach hasn’t changed at all.

Working through the settlement quests, I decided that a few things that would make them less, let’s say… amazingly freakin’ annoying. Far be it for me to gainsay Bethesda’s inarguable genius, but: 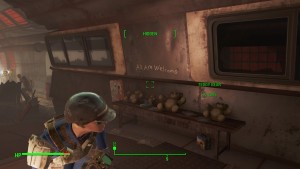 Maybe I could get the Teddy Bears to defend the settlements? They’d be about as effective as the Minutemen, I think.

Before (sort of) abandoning them, I spent time organizing my settlements. In all of my recent work I didn’t recruit a single new settlement. With 25 in total, I may have caught them all, although the game may have a few more waiting in the wings. I singled out six of the largest ones – Sanctuary Hills, Covenant, Abernathy Farm, The Slog, Warwick Homestead and The Castle – as my “large” settlements. I outfitted each of these with 20 beds, a radio beacon and a collection of shops.

I’ve also organized my companions; one to each of the large settlements. Piper (my main squeeze) lives at Sanctuary Hills along with Dogmeat. Cait seems happy at Covenant, Strong is a good fit for The Slog, MacCready is helping to defend Abernathy Farm and Hancock is a good fit with the Warwick Homesteaders. The one oddball is Codsworth, whom I sent to Graygarden, my all-robot settlement. It seemed fitting. 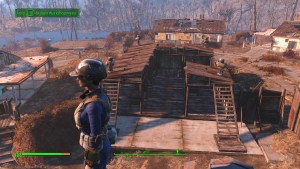 The Shops at Sanctuary Hills are now open.

For all of the rest – my “small” settlements – I set up 10 beds and a scrap station. I removed radio beacons and capped their populations at nine settlers. As I get a surplus of settlers at the larger settlements, I’ll redistribute them to any smaller ones lacking bodies.

Finally, every settlement, small and large, were given a surplus of food and water and at least double the recommended defense. I’ve abandoned manned defenses in favor of turrets; lots and lots of turrets. I had some issues collecting enough materials (specifically oil) for them, but in the end everybody was nicely secured.

I may be ignoring them when they ask for help moving forward, but they can’t say I’ve not provided them with every opportunity. 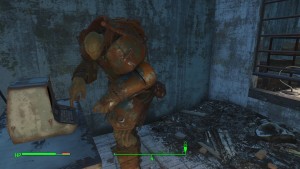 Strong does computer! Where cat pictures?!

Since Hancock already loved me, I decided to give Strong the super-mutant a chance. I didn’t expect to get along with him, but it turns out that he really enjoys helping out settlements – or at least he enjoys smashing raiders with the the giant, rocket-assisted hammer I gave him. I’m going to have to dig into the damage system at some point: Strong seems less than effective against most humanoid targets, but can down a mutant hound in a single strike. Maybe I shouldn’t be totally ignoring melee?

I was on the fence about the new super-mutant design. I’ve come to really appreciate the more subdued colors, looser skin and ramshackle armor. It gives the Commonwealth super-mutants an odd sense of… lethargy? In previous games they were firm, buff and seemed to be actively working toward a goal. In the commonwealth, their skin hangs loose from their frames and there’s a listlessness about them. They’re just as strong, but seem older, more weary. 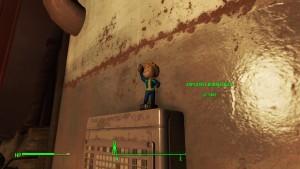 How did I not see this the first two times I was here?

As I mentioned, returning to old locations has been profitable. I consider myself a methodical player, yet it’s hard not to feel just a little silly when I miss, for example, the Explosives Bobblehead at the Saugus Ironworks (twice). Speaking of bobbleheads, while visiting my friends at the Warwick Homestead I was distracted by the nearby Wreck of the FMS Northern Star. After dealing with the raiders there, I came across the Agility Bobblehead perched on the prow. 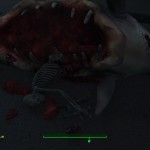 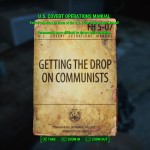 … and this magazine in the National Guard Training Yard… 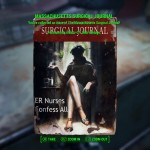 … and this one tucked in a store room at the Medford Memorial Hospital.

Eventually, I’ll break down and wiki my way through all the collectibles I’ve missed, but I’m feeling good about the frequency of my finds so far. 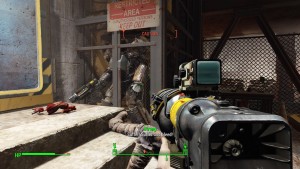 On my second visit to the Ironworks, I ran away again… and the boss spawned inside the machine cage. He was slightly easier to deal with there.

There were also a couple of new areas to explore, but they were coming much less frequently. The first was one of my favorite locations in actual Boston: Faneuil Hall. (The exact pronunciation of Faneuil is still hotly debated, even among natives, although I most often heard it as “Fannil Hall” during my time there.) The stately old meeting house had been infested with super-mutants – ones that were bothering one of my settlements!

The fumigation of the super-mutants went well. The interesting find was made on the roof: the famous Gilded Grasshopper was not only present, it also had a nifty little side-quest associated with it! An attached note had me hunt down and defile the burial site of the designer of the grasshopper, Shem Drowne. I found some valuable metal, a nifty sword and the poor man’s skull. 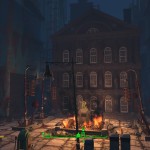 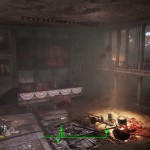 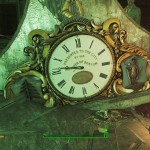 The great clock only partially survived the apocalypse. 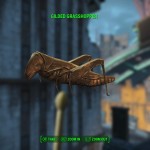 The actually famous (look it up!) Gilded Grasshopper. 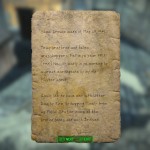 There’s a note! (Is it just me, or are these notes really difficult to read off of a TV screen?) 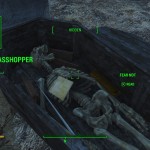 To the victor goes the really old, dead guy!

I do love quests that mix in actual history with Fallout style and I hope to see many more. With a canvas as large as Boston, the possibilities are literally endless. 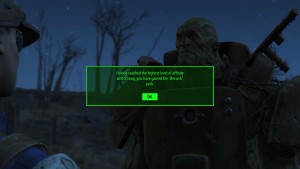 What, no romance option with Strong?!

During all of this, I unexpectedly gained Strong’s idolization. I’m still not used to the idea of earning a companion’s approval without an associated quest and, honestly, I miss the extra effort. MacCready and Cait spawned two of the more interesting side-quests so far, yet characters like Strong, Codsworth and Piper get nothing. It’s a shame: I had been intensely curious about exactly how I would find “the milk of human kindness”. Unless there’s some very interesting DLC, it looks like I’ll never know. 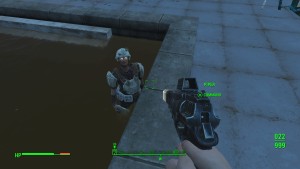 Piper, you were just complaining about the rads! GET OUT OF THE POOL!

I picked up Piper to continue my marathon of settlement quests. The final new area was something of a chore: the high-rise hotel, Hub 360. Nominally a straight-forward super-mutant den, the area was riddled with load-zones. A lot of progress has been made with eliminating seams in the world, but load times (at least on consoles) are still a major Fallout frustration.

I reached level 49 during this quest and decided: no more. I’m not returning to Preston to turn in the quests, although I did inform the settlers themselves (I’m not a monster). Nick Valentine has been waiting at least 200 (in-game) days to be rescued without complaint. These settlements can stand (or fall) on their own for a little while.