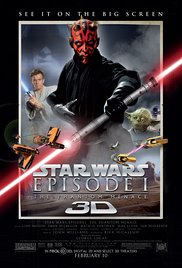 “Star Wars Episode One: The Phantom Menace” on IMDB

I won’t be seeing Star Wars: The Force Awakens [IMDB] for at least a few more days. I hate crowds nearly as much as I adore the franchise, so will sneak into an early matinee sometime soon. All of the fuss has made me think of the last “Star Wars” premier I was excited for.

Star Wars Episode One was released in May of 1999. At the time LucasFilm was still releasing its own films making them, technically at any rate, independent features. Indie films with massive budgets, marketing and mindshare, but indie films none the less. My lovely bride and I lived in Boston at the time and, as it happens, she the assistant manager of the Embassy Cinema in Waltham, MA.

The Embassy was the second Landmark Theater in the area. They’re large, upscale, multi-screen venues that cater exclusively to independent film. This release was enormous for them and the staff were “all hands on deck” for the premier. This meant that my nepotism got me four tickets to the premier, but no date for the night.

Instead I invited a few friends. Through some misadventures, two of them dropped out leaving only me and Chris, one of my older friends. He asked if he might offer the two remaining seats to some friends of his that I had never met. Chris is a solid guy – we’re still friends, if long-distance ones, to this day – so I was fine with it.

Before getting deeper, I’d like to set the stage. This was before anybody knew that the prequels were complete and utter shit. This was before Jar Jar Binks. It was before the Trade Federation. It was before pod-racing, casual racism and nearly an hour of space politics. Fans were AMPED for this movie. It was, like its predecessor, going to be the best thing to happen to an entire generation.

Theaters showing it were under incredibly strict rules of conduct. Prints (this is before digital) were individually water-marked to prevent piracy and punish any theater that allowed it to happen. Lucasfilm was hiring independent inspectors to stop piracy. The print had only been delivered hours before the premier to prevent the unofficial Thursday “midnight showings” that theater employees often enjoy.

We met at the theater. The crowd was pumped and many were in costume. Smiling parents were excited about introducing their sadly ignorant children to something that would blow their little minds. Chris showed up and his friends – a married couple – were with him. Nobody said much, but they seemed nice enough. I honestly can’t even remember their names.

I noted he was holding a large, 1999-style video recorder. He explained that he did an “Internet Show” that was, in his own words, “kind of like Letterman”. Keep in mind, this was a full six years before YouTube. What he meant was that he created grainy two or three minute QuickTime videos and posted them on a Web page for people to download. Granted, it was novel for the time.

Since I can’t remember his name, I’m going to call him DB from now on.

DB began by taping the crowd while providing a snarky voice-over. His humor was annoying and forced, but, at the beginning, benign enough. As the crowd moved into the lobby, we were pulled aside by Chet, an employee of the theater and a friend. He was dressed as Darth Vader and handing out promotional trinkets to the many kids in attendance. He was understandably worried about the video camera. It was, obviously, strictly forbidden by both theater and Lucasfilm policies.

We talked it over and, as a favor to me, DB was allowed to keep it on the condition that it wasn’t used after the lights dimmed. DB agreed. Since we had already been pulled forward to discuss the camera, we were one of the first ones in the theater and able to snag the “Sweet spot”: right in the center, around the 13th row. DB immediately began recording.

His running commentary was getting both louder and more acidic. When a family, all beaming happily in Jedi robes, passed, he commented on how unlikely it was for “Star Wars fans to have bred”. His jokes weren’t going over well, but he seemed convinced that people just weren’t hearing him. He tried the line “it smells like Star Wars fans in here” several times, each louder than the last, before giving up.

The theater staff had gone all-out for the event and several were in costume. Chet officiated over a trivia contest where winners, mostly kids, won various prizes. Attendees were invited up for an impromptu, “everybody wins something” costume contest. The crowd loved it. DB mocked it. Loudly. Several people around us were getting sour looks on their faces.

The staff cleared out, the lights dimmed. The anticipation was a physical thing laying heavily on the audience. The greatest thing in the history of ever, anywhere was actually happening and we were there! The screen darkened. John Williams’ classic score music swelled. The famous yellow crawl appeared… and DB lifted his stupid fucking camera and started recording it.

I elbowed him in the ribs until he lowered the camera. He said, loudly, “what?!” I started to respond, “it’s illegal and you promised not to I vouched for you to my friends and to my wife, all of whom would be in serious trouble if you continued and, you humorless self-centered fuck, I got you these tickets for free and you’re a guest here and you’re not funny and I hate your face!” but only got “It’s illegal” out.  It seemed to work, at least, as he didn’t try to record anything else.

The rest of the movie did nothing to improve the evening, of course.

Later that week, through Chris, I was invited to be a “guest” on DB’s show. I declined. I learned later that he mimicked an interview with me using stills of “The Comic Book Guy” from The Simpsons as a stand-in (admittedly not a wholly inaccurate representation at the time). He also used the several seconds of stolen video from the movie. This ultimately didn’t result in any problems for the theater, but it had people worried.

I can’t honestly say that DB ruined the movie for me – we all know that the movie ruined itself without any help – but I can say that he definitely didn’t help. My son was only six months old when “The Phantom Menace” was released. He’s now 17 and I’m optimistically hopeful that we’ll both enjoying a new, good Star Wars movie soon. Hopefully without some asshole mocking us for it.