After many years building their skills producing award winning short films, Pixar quietly slipped Toy Story [IMDB] onto the big screens in 1995. Initially a curiosity – it was the first feature-length computer animated film – it quickly won over audiences and critics. The movie became an instant classic and established Pixar as a force to be reckoned with.

This initial success was short lived. It was replaced by mind-numbing, Earth-shattering success. Their 16 feature films have earned 12 Oscars and over four billion dollars in ticket sales (and that’s not counting the billions more in home media, partnerships and merchandising). No studio in history has enjoyed such a consistent record over such a long period of time.

Not every outing has resulted in a classic. Cars 2 [IMDB], for example, suffered lukewarm appraisals from critics even as it went on to best the box office totals of the original. Yet the rule remained: even the worst  Pixar movie was still pretty damn good.

Due to various creative shake-ups, Pixar’s planned 2014 release, The Good Dinosaur, was pushed back to late 2015, just a few months after their summer 2015 release, Inside Out. I recently saw both of them within a few days of one another.

(There will be a few, minor spoilers ahead.) 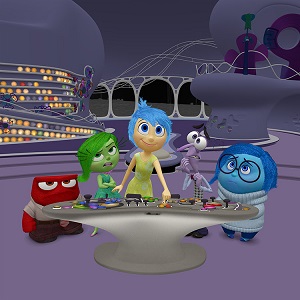 Inside Out is the story of a young girl, Riley, who has been uprooted and moved across the country. We experience her struggle internally, via personifications of her basic emotions and the metaphorical mental edifices they construct. Everything Riley loves has been changed and her struggle to accept those changes is a story that the audience can intimately empathize with.

Her goals, like in all of Pixar’s best movies, are simple and universally understandable. She was happy and is now sad. She wants desperately to be happy again, but doesn’t know how. How she achieves her goals may be complex and unexpected, but what she wants is clear from the start and never changes. 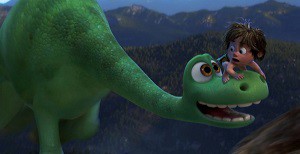 In The Last Dinosaur, Arlo is a young dinosaur. He’s the smallest and least capable of his family of farmers. He wants to make “his mark” and prove himself by doing something important for his family. Instead, through various misadventures, he ends up far from home and befriending a young, less evolved, human, that he names “Spot”. Together, they struggle to get home.

Arlo has many goals and how he’ll achieve them are unclear. They also change as the movie progresses, further confusing the audience. Arlo wants to help his family, but doesn’t pursue any specific way of doing so. He wants to make his father proud and overcome his fears, but this is done almost by accident rather than any directed plan. He (eventually) also wants to care for Spot, yet doing so is unrelated to either his family or his fear. 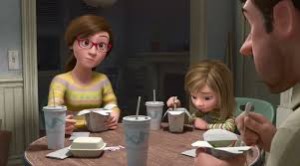 Riley and her parents.

Inside Out features the brightly colored, smoothly animated characters and gorgeous, but stylized environments that scream “Pixar!” The visuals are richly textured and lit, but simplified and, especially the metaphorical emotions, cartoonish. The characters and environments support one another completely such that you never question them. If this is what the world looks like, then this is naturally what a person in it would look like!

In The Good Dinosaur the visuals are at odds with one another. There are shots of the environment in this film that you’d swear were filmed from life. They’re that good… and totally incongruent with the multiple character designs. The human caveboy, Spot, is the most “Pixar-like” of the characters. His wide eyes, flexible brows and mouth are expressly designed to convey emotion. Many of the other creatures have a similar super-deformed, yet realistic style. 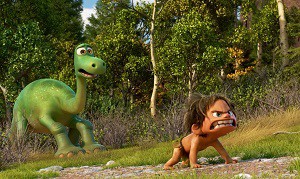 Real trees, a Pixar boy and a Tex Avery dinosaur.

In contrast, Arlo the dinosaur feels more like classic Tex Avery theatrical animation. Smooth and more simply textured, he has a gangly, boneless elasticity that favors physical emotion and slap-stick more than subtlety. While expertly designed and animated, he simply doesn’t seem to fit with his environment or many of the other characters.

Furthermore, the character of Spot is just… weird. He’s a human, but given all of the traits and behaviors of dog. The story explains this, badly, by explaining that the meteor that wiped out the dinosaurs missed, leaving them as the dominant (but bizarrely, physically unchanged) life on Earth. Still, Spot is a dog. He never evolves past it. The movie never introduces the obvious idea of intelligent humans and intelligent dinosaurs working together. Arlo is played as a boy (with scales), Spot as a dog (opposable thumbs). Period.

Both films have a strong voice cast, but it’s difficult not to give a nod to Inside Out’s masterful casting of its iconic emotions. Could anybody personify Joy as well as Amy Poehler [IMDB] or, most especially, Anger as well as Lewis Black [IMDB]? The Good Dinosaur’s casting choices seem less inspired and more… gimmicked, perhaps? Sam Elliott [IMDB] playing a grizzled cowboy seems more than a little on the nose, doesn’t it? 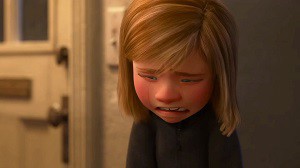 Pixar has never shied away from tackling darker themes. Children’s emotions may be wildly changeable, but they’re no less deeply felt. The best movies give them the opportunity to experience more than simple laughter and build suspense, dread and sadness. Most importantly, they layer these emotions in realistic ways. Life is complicated and, often, more bittersweet than sweet.

Inside Out, featuring a cast of core emotions, may have an unfair advantage here. The story of a child’s Joy struggling vainly to distract it from deep, encroaching Sadness may be less than subtle. It’s also incredibly powerful. Children are validated by seeing that even their negative feelings are natural and important. Adults may long for a simpler time when they could experience their emotions more fully and more openly. Parents will ponder the vast power they wield over their children’s happiness.

The Last Dinosaur continues to suffer an identity crisis. Its darkest moments are undeniably meaningful, but also so overplayed and cliched that the intended impact is greatly tempered. More importantly, the darkest moments don’t lead to purposeful change, for good or ill. The major events in the film are all the result of increasingly unlikely coincidence. Just how many flash floods could happen on the same river in the space of a few months? 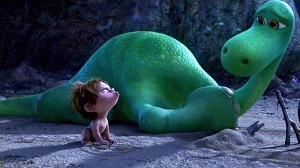 The characters lack agency where agency would most define them. Arlo’s adventure seems to be on a rail. Only rarely is he offered the opportunity to make a real, meaningful choice. Spot, and every other character, for that matter, never grow at all. They all move through the story, untouched by it.

In the best Pixar films characters grow mutually to understand each other. All of the Incredibles mature tremendously during their adventures. Marlin doesn’t just rescue Nemo, Nemo also rescues himself. WALL-E expands his horizons, but EVE’s as well. Arlo does change for the better, however haphazardly, but makes almost no impact in doing so.

More drastically, The Good Dinosaur features several scenes that are shockingly out of place for a Pixar film. Ham-fisted, amateurish attempts to engender fear, mirth or some other emotion that not only fail in their immediate goals, but detract from the rest of the movie as well. In one of the more innocent examples, Arlo and Spot eat spoiled berries and have drug-induced hallucinations for no reason whatsoever. In the most drastic example, we see a cute, wide-eyed little animal who is instantly eaten by a crazed dinosaur… which leads to a short, but brutal, fight for the rest of the… meat.

Pixar has featured similar themes before. The evil Hopper, from A Bug’s Life, was fed to baby birds and Linguini from Ratatouille spent a scene drunk. That events like this are incredibly rare should be an indication of how powerful they are, yet The Good Dinosaur uses them as throw-away gags. It feels more like the quick-cut world of classic animation shorts, where terrible things would happen regularly, but were masked by fast action, loud music and a purposeful decision to ignore consequences. 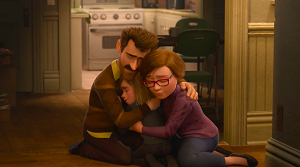 You can always lean on family…

Quality, emotionally-rich storytelling has always been a hallmark of Pixar. Many studios make visually breathtaking animation that fails to make meaningful emotional connections with the audience. Pixar always ground themselves with a clear, universally-understandable goal, first and foremost.

Some fundamental love informs every major action. Marlen must find Nemo; every one of his actions are born of his love for his family. Remy has to cook, even if it puts his little rat-butt in mortal danger. Woody can’t disappoint Andy, even if it means helping a rival. Mr. Incredible has to be strong for those around him. Carl Fredricksen has to honor the memory of his wife, even if he misunderstands how at first. 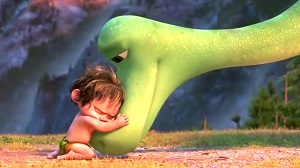 … even if they’re new family.

Inside Out’s rich metaphorical world mirrors Riley’s more mundane, but not less important, real world. Her mental “Hockey Island” may be fantastical, but the love it represents is absolutely clear. Riley herself is confused and unsure how to process her feelings. but her emotional stand-in, Joy isn’t. Joy’s dedication to maintaining the happy status quo may be ultimately misguided and immature, yet it’s a struggle everybody can empathize with.

Arlo’s story is more scattered and without singular drive. He’s tossed on the wind (both metaphorically and physically) and has trouble focusing on his many goals. Surprisingly, this might make Arlo the more realistic protagonist, but it also makes him an ultimately unsatisfying one.

Spoilers aside, it’s no suprise that Pixar films tend to end happily. Challenges are met, villains are defeated and goals are accomplished. Because of their struggles, the characters have new friends, better circumstances or, at the very least, move forward with a better understanding of one another.

Inside Out continues this tradition. Riley’s confused emotions come to respect and rely on one another. The relationship between Riley and her parents matures painfully, as it must, into something stronger than it was. The Last Dinosaur, in continuing contrast, fails to address the core issues it began with. It is a happy ending, superficially at any rate, yet one that remains unsatisfying because the struggle resulted in so little meaningful change.

The close release dates may be responsible for exaggerating the differences between the two films, but it remains difficult to imagine two family films more fundamentally different from one another.

Inside Out is a quintessential Pixar movie from start to finish and is, in fact, one of their strongest films in years. The Last Dinosaur is a muddle, albeit gorgeous, mess. It’s not a terrible film and the rule that even the worst Pixar films are still pretty good remains true. It simply doesn’t feel like a Pixar movie at all.