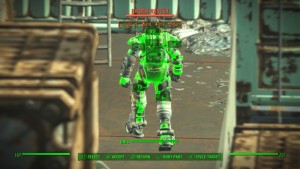 The Awareness perk: like taking a peek at somebody else’s underpants.

I continue my play diary of Fallout 4 on PlayStation 4. Today, uncharacteristically, I actually moved the story forward a bit with the help of Nick Valentine.

Since pushing my difficulty level to “Hard” I’ve definitely seen an increase in the number of legendary enemies and corresponding legendary loot. The actual quality of the loot doesn’t seem to have risen dramatically, but more random draws overall definitely means more good (as well as not-so-good) loot. If nothing else legendary items do sell at a premium, although it’s not as if caps are difficult to come by in the game.

I did reach level 60, so expect the next installment to do be a character overview as I did on Day 17. I used my perk point to purchase “Awareness”, which is definitely nice to have, but far from necessary. You can see an enemies level, specific armor ratings and resistances but, so far at least, no “secret” weaknesses.

… And Now for Something Completely Different

I spent a lot of time complaining about my settlement and their neurotic inability to achieve happiness last time. I expect I’ll be doing more of that as time goes on, so I thought I’d spend some time today talking about something positive. Like cows. Two-headed cows. They do the darndest things! 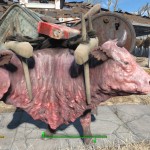 They try to go in two directions at the same time! 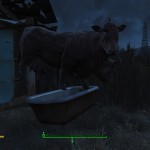 They do tricks in the dead of night! 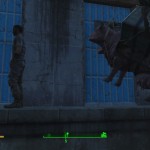 They sneak up on people! 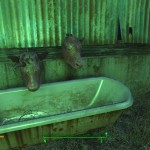 They eat through walls! 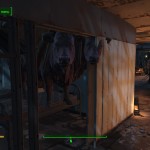 They sleep in beds! 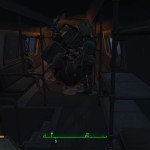 They sleep on buses!

Finally, at least in my experience, they seem to always be running everywhere at top speed like a mutated Forest Gump. Really, once you get a good number of provisioners wandering around you will see so many running cows.

I’ve got 100 caps that says the Institute is run by cows. 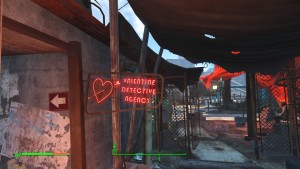 I headed over to Diamond City to speak to Nick Valentine about my missing baby. He asked me to talk through the whole mess – at length – and my description of the assassin rang a bell. A pile of bad news named Kellogg, who used to live in Diamond City, fits the description perfectly. Nick suggested that we search his now vacant home.

A little breaking-and-entering later and we had discovered a hidden room. Nick suggested that we use Dogmeat to track Kellogg’s scent, although I never told him that I had a dog. In a movie, this would be where we realize that Nick is a double-crossing spy! But this Fallout and things like this happen. 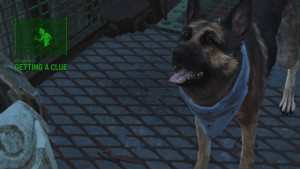 Dogmeat took us via the scenic route. I got distracted by a rooftop maze that netted me some “Mutated Ferns”. I’m sure somebody will find them useful. We also got ambushed by a large group of molerats which, at this point, are definitely one of the more annoying enemies.

That sad, I’ve seen very little wildlife overall. I could count on one hand the number of yao-guai or radscopions I’ve seen. I’ve literally encountered more deathclaws than both of them together. Even “common” creatures like Radstags have become downright rare. 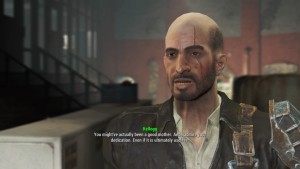 Dogmeat, when we eventually listened to him, led us to Fort Hagen. It quickly became apparent that Kellogg was holed up here with a small army of First Gen Synths. Happily, he was also guarding an issue of Robco Fun and the Energy Weapons Bobblehead.

Kellogg taunted me through the entire facility. The idea of his character is clearly, “the philosophical villain”. He speaks softly and slowly, almost wistfully, about terrible things. It really doesn’t work all that well, but he’s dead now, so I don’t think we’ll be hearing any more from him. 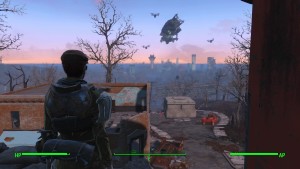 Hey, The Brotherhood’s got a blimp!

Before he died, he revealed that Shaun is “probably a little older than I expect.” He said this twice but – suprise! – I already figured that out. Kellogg had delivered him to The Institute. He didn’t reveal why he did it, or how to contact them or where they were. Instead of forcing him to do so, I shot him repeatedly in the face. I feel like this may have been a tactical error, but the game gave me no choice.

Upon leaving Fort Hagen, through the roof door, I heard a loud announcement telling me that The Brotherhood of Steel had shown up in force, but I was simultaneously under attack from a large number of turrets so couldn’t actually take a peek until they had already flown by some distance. Still, nice blimp guys!