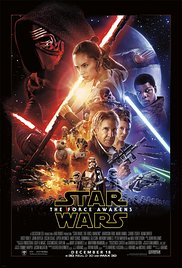 A couple of weeks ago, I shared the painful story of how I saw Star Wars: The Phantom Menace on opening night, seventeen years ago. It was a sorry experience for more reasons than you’d think, but it did teach me an important lesson: even Star Wars can disappoint. The obvious question is: does it again?

(There will be no spoilers here.)

New ownership and creative control is promising, but could still backfire. Disney vacillates wildly between solemn curator of our collective childhoods and greedy consumer whore.  Director J.J. Abrams [IMDB] has been responsible for amazing work. He’s also proven, at times, to be less than gentle with beloved source material; something Star Trek fans might tell you. At a party. At length. It’s undeniable that the movie is doing well. It’s earned a billion dollars in less than two weeks. Of course, box office gross remains a poor indicator of quality.

So, does it disappoint? No. It doesn’t.

It may be that Abrams took the criticism of “Star Trek” to heart and embraced the original trilogy. Perhaps the change in ownership simply revitalized those working on it. The return of the original cast may have given proceedings a shot in the arm. Whatever the reason: this movie was able to capture everything that made Star Wars great. It also captured everything that made it silly. That’s part of the charm.

Most subtly, there’s a  wonderful, persistent use of classically-styled practical effects. CGI is well represented, of course, but it’s the practical effects that will warm your heart. Many of these effects are, bluntly, not very good. Yet they’re not very good in exactly the way a Star Wars effect should be… “not good”. They recall the original, nearly 40-year old, movie in such an amazingly precise way. It’s difficult to convey how effective this is in setting the appropriate mood.

Most obviously, the overall plot is clearly designed to invoke fond memories of the original. Similar circumstances exist in similar settings. Similar challenges are presented in similar ways, perhaps with differences in scale. Naysayers may argue that the plot – at least in large part – is stolen from the original, but this would be ignoring the pedigree. Certain things happen in (good) Star Wars movies. The same way certain things happen in (good) James Bond movies or in (good) Terminator movies. Like it or lump it.

Then there’s the silly; all of it. The empire still banks on enormous projects with obvious weaknesses. The heroes still rely on coincidence and luck more than strategy. Nobody can seem to remember things that shook the galaxy just a couple of decades ago, understand “light speed” or, really anything, about science. It all works. Like the classic serials on which it’s based, Star Wars is unabashedly about adventure, not accuracy.

Which is the key. This movie is fun. As hell. This, more than anything else, is where the prequels failed: they replaced fun with slapstick and adventure with exposition. This is as fun as the original, and I can’t praise it more than that. The characters are likable everymen with more heart than skill. They succeed, like an intricate Rube Goldberg contraption, in spite of themselves.

Finally, all these threads are presented in a sincere, meaningful emotional context. The characters, both old and new, face enormous challenges, both physical and emotional. They forge new relationships, strengthen old ones and choose sides. Ultimately, it’s the heart of the movie that keeps the audience enthralled from scene to scene and leaves them wanting more.