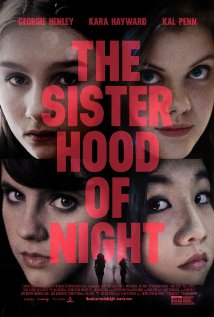 “The Sisterhood of Night” on IMDB

Before I begin, an admission: I had no interest in seeing this. At all. I gave it a glance and dismissed it as another brooding, tween, After School Special melodrama. Somebody would offer somebody else drugs, they’d just say no. Somebody else would cry and so forth and so on. I am, however, married, and this film was shot in my lovely bride’s hometown at her former high school.

So, guess who got to watch “The Sisterhood of Night”?

High-school students Emily (Kara Hayward [IMDB]) and Mary (Georgie Henley [IMDB]) are engaged in a mean-spirited prank war when Emily takes things too far and steals Mary’s private texts and publishes them on the Web. Mary responds by taking a “vow of silence” and removing herself from social media entirely. Along with friends Catherine (Willa Cuthrell [IMDB]) and Lavinia (Olivia DeJonge [IMDB]) she creates the Sisterhood.

Meeting secretly at night to do lord knows what, the Sisterhood slowly grows as Mary invites others to join. Membership becomes a status symbol, although a vow of silence prevents others from knowing what actually goes on in the group. After Emily accuses the group of attacking her and violating her sexually, the town gains national media attention. The pressure builds as other girls add more accusations and the Sisterhood remains mute.

The movie fires a lot of teenage clichés at the audience in quick succession, gatling-style. Cyberbullying. Peer-pressure. Former friends who are now enemies. Former friends who are growing apart. The popular girl lashing out. The good teacher, just trying to help, accused of improper behavior. Parents overreacting. Children misunderstanding. Media exaggerating. It’s all here and much, much more.

There’s a subtlety to the presentation that contrasts with the decidedly unsubtle themes. It’s an undeniably pretty film with a soft, insightful eye. The quality of the nighttime camera work, especially, deserves mention. Performances are impressively solid across the board. The four young stars receive strong support from a cast of seasoned, quality veterans.

The film sells itself as a thrilling, modernized version of “The Crucible”. Those expecting thrills will be disappointed. There’s little tension in either the story or the pacing. There are surface similarities with “The Crucible”, but any deeper connections would be forced and awkward. This is a drama: end of story. It’s a decent – even good – one, but a simple drama. Billing it as anything other is a disservice to itself and the audience.

The movie is better than expected, but failed to rise to greatness. With such a smorgasbord of themes and emotional manipulations anybody that’s ever been a teenager will likely find something to pluck at the heart strings. Of course, full admission: I’m a 44 year-old fat man. I’m about as far from the target audience of this as one could get. My lovely bride loved it, and not just because her high-school was featured.