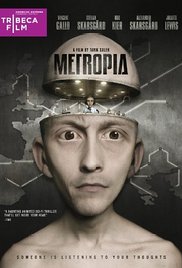 This is that last one.

The story is familiar. but does have moments. In the very near future, oil reserves are all but depleted. In response, Europe has banded together to create a massive, subterranean subway network and, in the process, given the company that manages it unprecedented power. Not enough power to light the perpetually gloomy metro, but you know, a lot of power. A nefarious, nearly omnipotent corporation with an eye towards domination of the species. A dark, labyrinth swarming with masses of depressed, downtrodden people.

Yup, dystopia. Dystopia all in your face.

Roger (Vincent Gallo [IMDB]) avoids the Metro whenever he can. When he uses it, he feels wrong. He hears voices in his head that pressure him. Pressure him in small ways, to be sure, but pressure him nonetheless. It’s creating distance in his marriage and problems at work. When he spots Nina (Juliette Lewis [IMDB]), the super-model spokesperson for the popular shampoo, “Dangst”, he impulsively follows her and is drawn into a mind-bending conspiracy.

The obvious draw here is the visuals. Generated from computer-manipulated photos and animated in a distinctive, marionette-style they’re spectacularly creepy. The super-deformed characters have a disturbing realism (and, at points, an even more disturbing sexuality) that underscores the bleakness of the environment and themes. The technique is most successful with close, conversational scenes and less so with action, but always visually impressive.

As impressive as the visuals are, they provide very little contrast or suprise. The pacing walks a fragile line between “tense” and “dull”. Although the root elements of the story are clean and simple, the plot quickly becomes overburdened with contrivances and each of these need to be slowly, deliberately explained before moving on.

Animation fans will be pleased with the innovative techniques even if they are underwhelmed by the less than original story. Conspiracy theorists, on the other hand, may enjoy how the film reinforces their world view. For everybody else, it will be a toss-up.