My son was four in 2002 when Insomniac released the first “Ratchet and Clank” game on the PlayStation 2. He wasn’t truly able to play, but he watched me avidly and was upset if he discovered that I’d played without him. With the release of following games, they became our favorite series. We’d play through the games together, sharing our discoveries, and comparing notes. He’s 17 now (and I’m old). Will the modern reimagining of that first game and the companion feature film hold up to our idealized memories?

These are a retelling of the first game. Chairman Drek (Paul Giamatti [IMDB]), the evil leader of Drek Industries and the Blarg race, has decided that they need a new homeworld. Their old one has become deadly poisonous from unchecked pollution. His plan is to build a new, perfect home from parts of others; they won’t be needed, after all, since he’ll be exploding those with a giant laser.

The story is somewhat abbreviated. The biggest change is the inclusion of the series signature villain, Dr. Nefarious (played, as always, by the amazing Armin Shimerman [IMDB]). The character was originally introduced later in the series, but has become such an intrinsic part of it that the change seems obvious. Other additions include Grimroth (John Goodman [IMDB]), an adoptive father-figure for the orphaned Ratchet and new Galactic Rangers played by Rosario Dawson [IMDB], Dean Redman [IMDB] and Bella Thorne [IMDB].

Happily, along with Shimerman, the series’ regular cast has returned to voice the main characters. James Arnold Taylor [IMDB] is Ratchet, David Kaye [IMDB] is Clank and Jim Ward [IMDB] resumes his expert hamming as Captain Copernicus Leslie Qwark. It’s nearly impossible to imagine other actors in these roles. 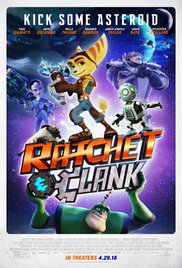 The movie is purposefully cartoonish, so it’s far from the cutting edge of CGI, yet gorgeous. Amazing environmental designs have always been a hallmark of the games and they’re happily intact in the film. Colorful, crazy characters and deft animation are expected and delivered.

Inventive hardware and wild weaponry are trademarks of the series. While they’re well represented in the movie, there’s a an odd feeling of absence regarding them. In the game you become intimately familiar with these while playing, leaving the cut scenes for the story and character development. The movie, being essentially all cut scenes, lacks those opportunities. It doesn’t exactly suffer for it, but it does feel somehow… incomplete?

The writing and humor is everything you’d expect from the franchise. Fun, soulful and more than a little corny. Although the story is enjoyable on its own, much of the more subtle humor comes in the form of easter eggs, callouts to gamer culture and one tremendously fun Wilhelm scream reference.

The movie does suffer in one specific way: the game based on it has been out for several weeks. The cut scenes in the game are pulled directly from the movie and the stories are identical. Playing the game, as my son and I have been doing since it was released, means not only that you’ll have already seen over a third of the movie, but that the remainder has little new left to say.

The movie was tremendously enjoyable, but would have been more so if we had waited to play the game. Those that are being introduced to the duo for the first time, or haven’t seen them since their early days, will find themselves well entertained. 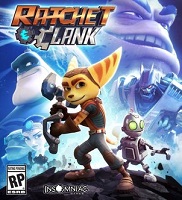 The comments about the movie are all applicable to the game. Visually, it’s stunning. Insomniac has always made some of the best looking games on the PlayStation platform and they don’t disappoint on their first PlayStation 4 offering. The environments are colorful, richly detailed and enormous.

The controls have evolved throughout the series and are buttery smooth. The camera is good, but there was a noticeable tendency for it to drop below shoulder level and obscure the view at times. The weapons collection is as insane as ever with many old favorites and several new additions. Fans will likely find a few favorites missing, but shouldn’t be too disheartened.

The Groovitron, the weaponized mirror-ball that make your enemies dance, has returned and now affects foes, friends and, sometimes, inanimate objects. The new shotgun-style weapon, The Pixelizer, “takes enemies back in time”, turning them into wonderful 8-bit renderings of themselves. The deadly Zurkon family is also well represented.

The story of the game has been changed to better match the movie. It’s also been rather dramatically shortened. Many locations from the original are missing in the reimagining. To balance this, some locations have been expanded, but this still leaves the game in the range of two-thirds the scope of the original. Surprisingly, the game lacks the customary arena mode or any way to “reset” individual worlds making post game playing and collection rather dull. You can, as always, restart the game in Challenge Mode, keeping your weapons and collection progress.

Like previous games, completing the game opens up the “Insomniac Museum”, an extra area crammed with development material and nostalgia. Unlike museums from previous games, which were full of interactive exhibits, extra gameplay and developer commentary, this one, with the exception of a couple of videos, is static, dark and lonely. What might have been a lively celebration of series history is designed to look forgotten and abandoned.

It seems an odd (and disappointing) choice, but does little to mar the overall experience. The game is shorter, but the altered story, new material and improved look make it fresh. Another point: it’s being sold at the discounted $40 price point Sony has adopted for its reissue collections.

It may not be the ultimate nostalgia bomb we were hoping for, but the game is a solid entry in the series. Good enough, at least, that my son and I have racked up seven playthroughs between us in three weeks.

It’s difficult not to feel biased. Ratchet and Clank has been a touchpoint for us across 15 years and four console generations. This outing is unlikely to set the world on fire, but it did warm our hearts and that’s all we’ve ever asked of it.