Well, we failed with our Extra-Life 2014 Marathon. Our team, the Vidiots, (feel free to donate) were able to make it most of the way but hit a wall in the 18th hour.

Although our team failed to stay awake, many others didn’t. The grand total as off 8am this morning was over five-million dollars raised, smashing the record from last year handily. 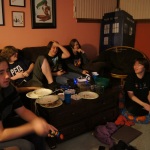 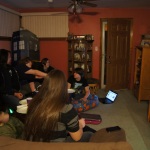 We thought it might be a nice diversion, but ended up playing it for nearly three hours. 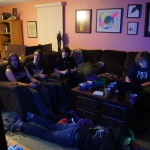 Still, Towerfall: Ascension was, by far, the winner of the popularity contest.

As much fun as we were having, we still couldn’t quite make it all the way. People started dropping off in ones and twos until there was nobody left. 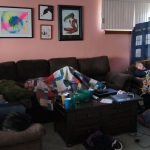 Most just crashed where they were… 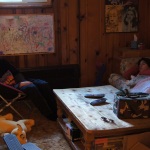 … but some made it to other rooms. 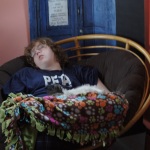 Surprisingly, nobody actually made it to the guest room – where two actual beds were waiting, empty. 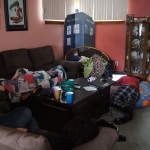 Still and all: everybody seemed comfortable enough. 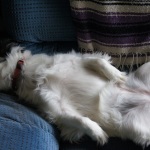 Even the mascot crashed. 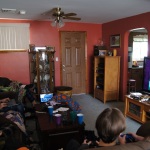 After a few hours sleep, everybody started right up again… but that’s what they always do anyway.

All told, even though we didn’t meet our goal, I consider this a success. Our team was thrown together at the last minute and the event was sandwiched in the middle of what’s turning out to be a very challenging school year. We raised a little money, blew off a lot of steam and gave us an excuse to finally clean the living room.